The sound, made with an obscure device that recorded sound waves on paper, is claimed to be the oldest known audio recording 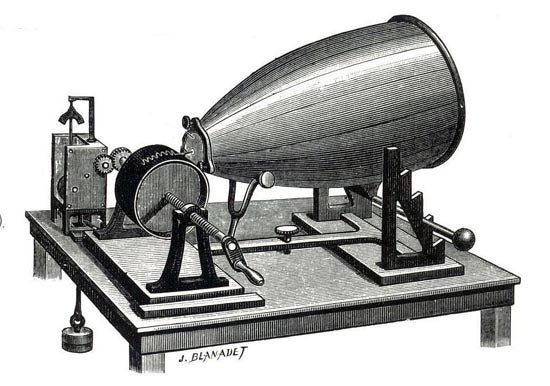 Preceding Edison's phonograph by 20 years was the phonautograph, which recorded sounds visibly on paper but lacked capabilities for playback.
SHARE

Thomas Edison has been dethroned as the father of recorded sound. The New York Times is today reporting on a find by American audio historians in Paris of a 10-second recording etched on paper in 1860, seventeen years before Edison invented the phonograph. The device, called a phonautograph, captured the snippet of song by scratching marks onto a paper blackened by smoke. Its inventor, Édouard-Léon Scott de Martinville, was a typesetter who was interested in the written preservation of speech. The resulting document was never intended for playback.

Modern digital scanning and pattern-recognition software have now, however, brought that document back to life. Scott’s tinkering has long been known to historians, but this is the first organized effort to rediscover the papers and digitally replicate their aural code.

While Scott was well aware of Edison’s later work and publicly rebuked him in his autobiography for stealing his methods, scholars agree that Edison developed his technologies on his own. Furthermore, Edison was ultimately interested in sound reproduction, not the seemingly esoteric notion of preserving sound on paper documents.

You can hear an mp3 of the entire recording at the Times website.