Spinning up a small intestine 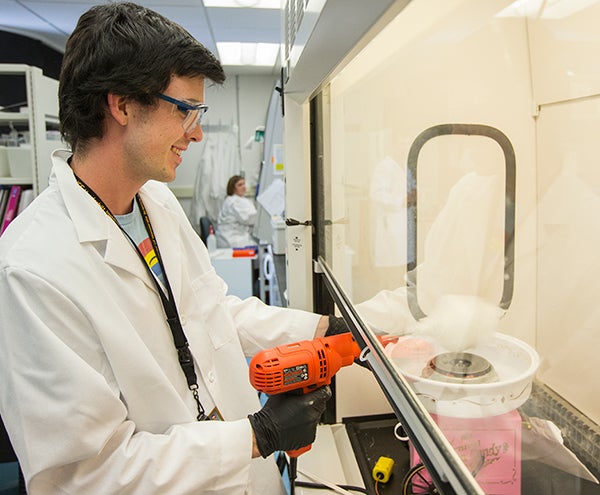 What do cotton candy and artificial tissues have in common? They are both made of layers of thin, fibrous material. And now they can both be made with a $40 cotton candy machine, according to Vanderbilt News and reported today by Fast Company. The researchers published their proof-of-concept study last week in the journal Advanced Healthcare Materials.

The researchers were making hydrogels, a matrix of gelatinous fibers that can support living cells and replace any number of tissues in the body, especially muscle tissue like those in the heart. Hydrogels are about as close as researchers can currently get to emulating human tissues because the moist fibers that make up the hydrogel allow oxygen and nutrients to flow to and from the living cells. To create these gels, researchers spin polymer fibers together into a mass using a process called electrospinning. However the process of making viable hydrogels would often take weeks and the water-soluble gel material frequently would not dry or cool properly.

Researchers at Vanderbilt University wanted to see if electrospinning using a cotton candy machine would work as well as the traditional processes. After fiddling with the contents and concentration of the polymer solution, the researchers figured out that they could sprinkle in the human cells and an enzyme called transglutaminase–colloquially called “meat glue” in the food industry–to make the gel coalesce. The resulting material looks a lot like cotton candy, as you might imagine, but it’s a mass of living cells connected by fibers about the same size as a human capillary. Once the mass had cooled, the researchers pumped it full of oxygen and other nutrients the cells needed to survive. After a week, 90 percent of the cells were still alive, compared to the typical 60-70 percent in solid synthetic tissue that doesn’t have the fibers.

Hydrogels like this one provide a matrix in which living cells can live and function, just like in real tissues.

This is the latest in scientists’ recent efforts to create low-cost artificial organs—3D printing is the other popular method. But since the distribution of polymer fibers is more complex in the cotton candy hydrogel, this might be the most life-like technique to date.

In future studies the researchers hope to test their cotton candy technique with other types of cells to create tissues similar to those found in several different organs in the body.