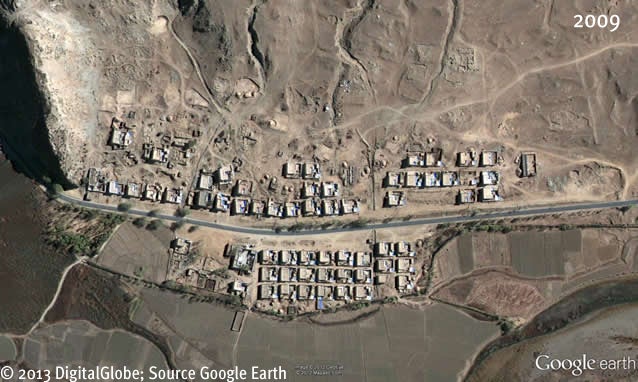 More than 2 million Tibetans have been forcibly moved to new housing since 2006, according to a new report from Human Rights Watch. The Chinese government has demolished villages and replaced them with substandard living conditions, the nonprofit organization says. New before-and-after satellite images show the destruction of original villages and their replacement with government housing:

“The scale and speed at which the Tibetan rural population is being remodeled by mass rehousing and relocation policies are unprecedented in the post-Mao era,” says Sophie Richardson, Human Rights Watch’s China director. “Tibetans have no say in the design of policies that are radically altering their way of life, and—in an already highly repressive context—no ways to challenge them.”

According to the 115-page report, Chinese authorities in the Tibet Autonomous Region plan to relocate more than 900,000 people by the end of 2014. The Chinese government denies that it has forcibly evicted residents and claims that the rehousing program respects “the will of the Tibetan farmers and herders.” But the report says that relocated Tibetans struggle with financial difficulties after being forced to move, reduce their herds, or demolish and rebuild their homes.

Human Rights Watch has called for authorities to end the rehousing program and permit an independent evaluation of the policies. Read more about this story, including testimony from Tibetan villagers, over at Human Rights Watch.

Satellite imagery is helping humanitarian groups identify rights abuses around the world. Last week, near-infrared images revealed attacks on villages in Darfur, and in May, satellite photos undermined the Nigerian Army’s claim that it had only destroyed 30 homes, showing instead that 2,300 houses had been burned.

Watch a video about the rehousing program in Tibet, including analysis of the satellite images, below: