The New York Times looks at studies of urban bicycling. 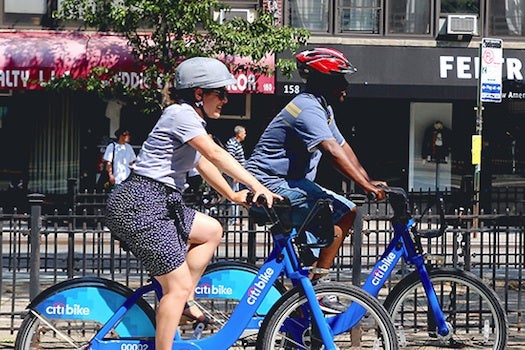 Want to make your city safer for bicyclists? Perhaps you should think about asking for a public bike-share program.

Bike shares, such as the new system in New York City, improve accident rates for all bicyclists. What probably happens is that the increased numbers of bikers make motorists more aware of bikers, David Vlahov, the dean of nursing at the University of California, San Francisco, told the New York Times.

According to the Times, biking accounts for 800 deaths and more than 500,000 emergency room visits a year in the U.S. The vast majority of visits and deaths result from head injury.

A personal injury lawyer told the Times that most of his cases involved “dooring”—when a person in a car opens his door suddenly into a bike lane. In a demonstration of the effect more bikers are able to have on bicycle safety, drivers in the Netherlands, where many citizens bike in the cities, are trained to reach across their bodies and open their doors with their right hands. The move forces them to check for bikers behind them.

There’s also a science to distracted biking—which is dangerous, just like distracted driving—and to the design of bike lanes. One scientist talked with the New York Times about studies that show that drivers unfairly give male bikers less room than female bikers.