5 Eco-Friendly Cities Built From The Ground Up 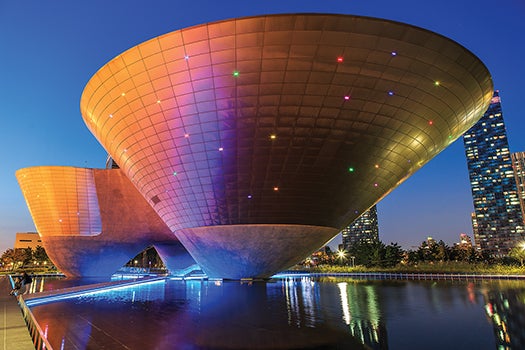 Lavasa
Maharashtra, India
Planned population: 300,000
Projected completion date: 2021
Lavasa’s designers are using biomimicry to transform an arid site in India’s Western Ghats into a lush city. Building foundations will store moisture, as trees do, while a multitude of tiny channels, modeled after those that harvester ants use to protect their nests, will prevent flooding during monsoon season.

Fujisawa Sustainable Smart Town
Kanagawa Prefecture, Japan
Planned population: 3,000
Projected opening date: Spring 2014
If Fujisawa succeeds, it could provide a template for designing cities with smart grids from the ground up. Each home will be equipped with solar arrays that will be wired to the grid. There will also be sharing services for electric cars and bikes.

Destiny
Osceola County, Florida
Planned population: 250,000
Projected completion date: Unknown
With plans for 200 miles of navigable waterways—complete with water taxis—and an expo center for researching and developing sustainable technologies, Destiny looks like the love child of Venice and Epcot Center. If Venice weren’t sinking and Epcot were a real city, that is.

Dongtan
Chongming Island, China
Planned population: 500,000
Projected completion date: Unknown
Dongtan was to be the first large-scale eco-city in the world. Plans included bioreactors to turn the city’s waste into energy and zero emissions buildings with green roofs. But problems with funding and community relations put the project on hold. It now consists of a lone wind farm. 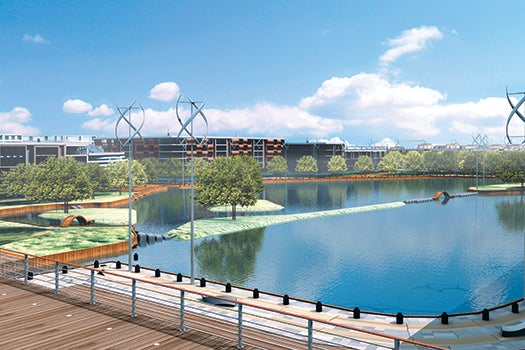 Dongtan in China is still in development.

Songdo
Incheon, South Korea
Planned population: 65,000
Projected completion date: 2017
Perhaps the most successful eco-city so far, Songdo is already home to 30,000 residents; engineers completed phase one in 2009. A pneumatic waste-collection system transports garbage by tube instead of by truck, and Songdo’s parking garages come with charging stations for electric cars.