Man Caught Smuggling More Than 10 Percent Of An Entire Species 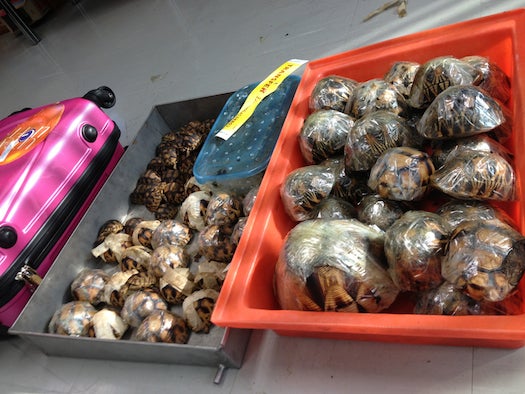 It’s tough enough for a species to fend off extinction without having smugglers as natural predators. In Thailand, a species-selling hub, it’s even tougher, especially when someone is trying to sell off MORE THAN 10 PERCENT OF ALL OF YOU.

Last week, a Thai man was caught trying to pick up luggage at an airport. That luggage was filled with 54 ploughshare tortoises, or Astrochelys yniphora. Since there are estimated to be as few as 400 wild ploughshare tortoises in the wild, that means the operation was an attempt to move more than 10 percent of the species. On top of that, 21 radiated tortoises, another endangered species, were being smuggled, too. A woman who the luggage was registered to was also arrested.

The tortoises were probably supposed to be sold as (really, really) exotic pets, the animal trafficking watchdog site Traffic says. That’s actually more common than you’d even think. The same day, Thai airport authorities made an arrest in an attempt to smuggle 300 Indian star tortoises and 10 black pond turtles.

In the last three years, according to Traffic, Thai authorities have found 4300 tortoises and turtles being smuggled like this. Just get a normal pet, guys.