Artificial photosynthesis–the idea that we might be able to create energy and other useful thing from sunlight, water, and carbon... 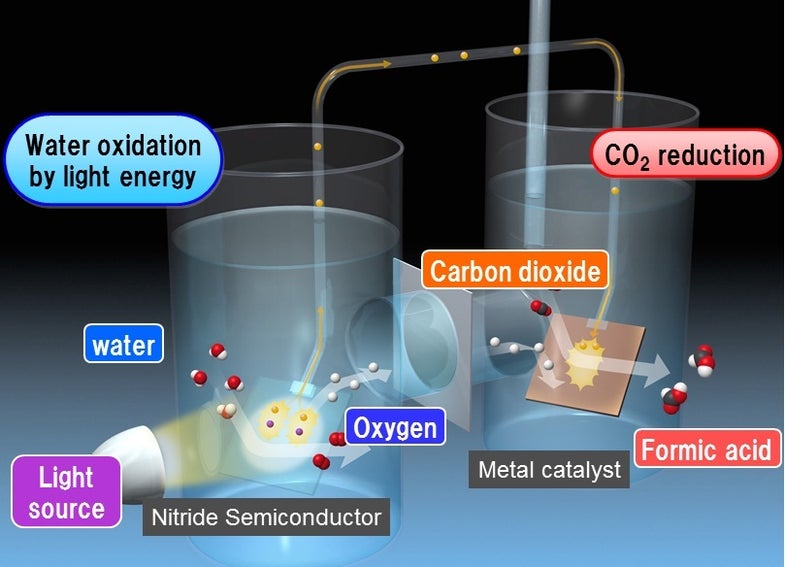 Artificial photosynthesis–the idea that we might be able to create energy and other useful thing from sunlight, water, and carbon dioxide, as plants do–is something of a holy grail for energy and green chemistry researchers. And while some efforts have shown modest potential–MIT’s Nocera Lab, for instance, claims to have created an artificial leaf from stable materials–efficiency is still a problem. That hasn’t stopped consumer electronics giant Panasonic; the company yesterday revealed that it is investing in artificial photosynthesis technology that turns carbon dioxide and sunlight into industrial chemicals.

Panasonic’s two-step approach involves a nitride semiconductor that converts sunlight into a flow of electrons that splits water into its constituent hydrogen and oxygen. A second reaction then coverts carbon dioxide and the harvested hydrogen into formic acid via a metallic catalyst. Formic acid is a widely-used chemical in textile production and food preservation, particularly for livestock feed (fun fact: it occurs naturally in bee and ant venom).

The problem here–as always–is efficiency. The conversion of water, sunlight, and carbon dioxide to formic acid reaches just two-tenths of one percent efficiency, far below the threshold that could make it commercially viable. But every technology starts somewhere. The company will present the research at this week’s International Conference on Photochemical Conversion and Storage of Solar Energy.