Fragile Earth, new in the App Store this week, is a simple idea, and it’s actually executed simply as well–two... 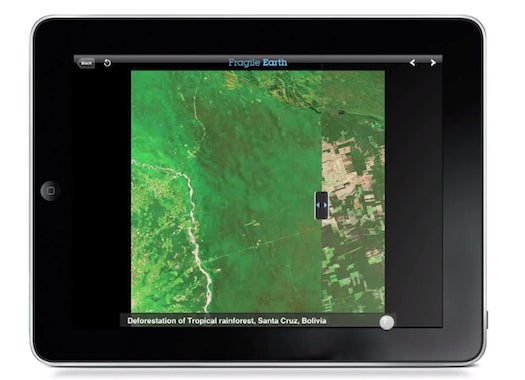 Fragile Earth, new in the App Store this week, is a simple idea, and it’s actually executed simply as well–two or more photos of the same place over time, with a slider so you can see how it looks in the past. But these are places that have been utterly changed by major, unstoppable forces: time, industrialization, development, and climate change.

The app, available until April 29th for $0.99, has versions for both iPhone and iPad, and it’s optimized for the new iPad’s Retina screen. There are currently 73 different locations, split up into categories like “Natural Phenomena,” “Warming World,” “Man’s Impact,” and “Wild Weather.” The specific locations can be filtered by date, theme, or region. Once you tap through to a specific image, you’ll get the image in fullscreen, with a tap-to-show bar at the bottom of the screen that gives more information about what you’re seeing. In the middle of the image(s) is a sliding bar that lets you swipe back and forth to see how the location has changed. It looks pretty much like this, only bigger, prettier, and sometimes with more than two included images (you can see the app in action here). Just slide the bar in the middle of the image back and forth to see things change:

The idea behind the app isn’t specifically about man’s impact or climate change, though that’s definitely a major part of it. There are plenty of natural disasters–one of the most jarring is the depiction of Hurricane Katrina’s destruction in New Orleans. Scenes range from the dying Aral Sea in Central Asia to the Indonesian tsunami to deforestation in the Amazon to the expansion of a blinking desert city in Las Vegas.

We wish the app was maybe a little less barebones, though it’s possible we’re spoiled by the extremely flashy Wonders of the Universe, the last app we looked at. And the starkness of the app definitely brings some gravity to these images, a kind of “we’re not messing around–this is a big deal” kind of feeling.

Fragile Earth is available in the App Store now.