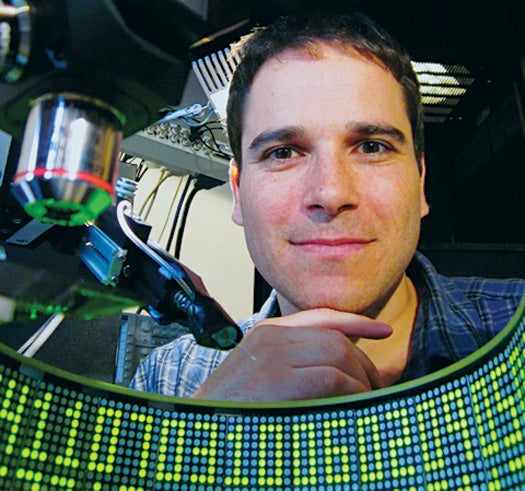 Gaby Maimon, of Rockefeller University, can read fruit flies’ minds. As their wings buzz under his microscope, he watches the neurons fire in their poppy-seed-size brains. By doing so, he is able to discern how the firing of certain neurons corresponds to certain behaviors. His goal is to untangle precisely how genes and neuron activation trigger behavioral disorders like autism and ADHD.

To achieve such insights, Maimon needed to be able to to study fly neurons while the insects were awake and behaving as they normally would while flapping their wings. He built a plastic platform that immobilizes the flies’ heads in a saline bath—where he can surgically insert electrodes into their brains—but allows their wings to stay dry and flap freely as they “fly” through a simulated environment. His recordings of neuron activity, the first recordings of active, awake insects rather than sedated ones, lets him see which cells are working as the insects make simple decisions, such as whether to turn left or right during flight.

Maimon, who was raised in Israel, has always been curious about complex behavior. In grad school he worked with monkeys, but he grew frustrated with the pace of the work, so after finishing his doctorate, he switched to insects. He knew that fruit flies, with their 100,000 neurons and easily manipulated genetics, could help him correlate gene activation with neural function and complex behaviors.

For his next project, Maimon will record the activity of the same neurons in different flies to see if cellular variations make them behave differently. After that, he’ll search their genomes for the code that builds those cells. The research could reveal how they—and we—make choices. It will take a lot of steady hands and fly-scale brain surgeries, but he has the surgical procedure down now. The trick? “You don’t drink coffee that morning.”