Amateur Photo Displays a Full Day’s Worth of Celestial Splendor

Photographer shoots and assembles an entire day of skies 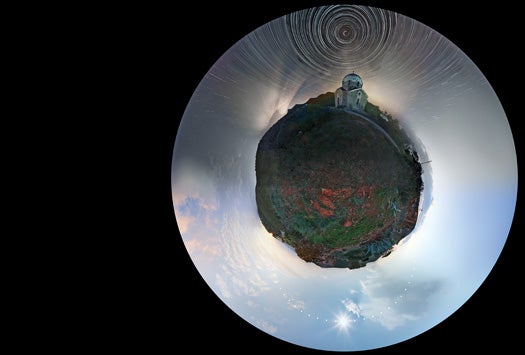 Amateur photographer Chris Kotsiopoulos created this continuous image of the sky over Sounio, Greece, a town near his home. Late last December, he recorded the sun’s path across the sky during the day and an 11-hour star trail at night.

With his DSLR camera on a tripod, Kotsiopoulos snapped a photo every 15 minutes while the sun was in the sky. An astrosolar filter softened the sun’s glow, but he removed it for a more dramatic image when the sun was near its highest point. For the night image, he took 500 consecutive 90-second exposures. To make the little planet, Kotsiopoulos took 25 horizon shots during a 360-degree pan of the landscape. He stitched the image together using Photoshop, Startrails and PTGui image software, but Kotsiopoulos relied on some low-tech help, too: An alarm clock kept him awake for the nighttime part of the shoot.