Science Tricks the Brain into Experiencing Having Three Arms

If you’ve ever wondered what it might be like to have an extra arm, a team of Swedish researchers would... 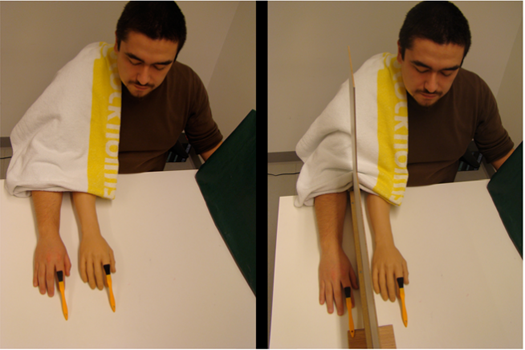 If you’ve ever wondered what it might be like to have an extra arm, a team of Swedish researchers would love to show you. Scientists at the medical university Karolinska Institutet were wondering the same thing, so they set up an experiment to find out. It turns out it’s possible to experience having three arms at the same time.

How the mind perceives the body has long been a vexing question for scientists both psychological and physiological, and the commonly accepted line of thinking said that the brain more or less innately understands the blueprint of the body. As such, our brain shouldn’t be able to experience having more limbs than are naturally there.

But in a series of simple–if somewhat crude–experiments, the Karolinska team was able to trick the brain into accepting a third arm as the body’s own. The team took 154 healthy individuals and placed their arms on the table next to a third, realistic-looking prosthetic right arm.

Creating the third-arm experience was then as simple as creating identical stimuli for both the subject’s right arm and the prosthetic arm. That is, they touched both arms in corresponding places with two small brushes at the same time. Upon processing this visually, a conflict arises in the brain that it resolves in an unexpected way: it accepts both right arms as part of its experience of the body.

How can the researchers be sure? They did what any reasonable scientist would do: they threatened their subjects with kitchen knives. The researchers measured the degree of sweatiness of the subjects’ palms after threatening their hands–real hand for some subjects, prosthetic hand for others–to see if the brain showed different defensive reactions.

They found that the physiological manifestation (the sweating) of the psychological response (“sh*t, this scientist is about to stab me in the hand”) was largely the same whether researchers threatened the real hand or the prosthetic one–the brain, it seems, wasn’t making a distinction between the two when it came to risking bodily harm.

That’s exciting news for prosthetics researchers like the team working on the DARPA arm, as it sheds some light on how our brains perceive our limbs and therefore how we might at some point use the brain to control mechanical prosthesis. Points to Karolinska for getting savage in the name of science.