Using stem cell technology, scientists have produced male and female mice from two fathers, a breakthrough that could conceivably allow... 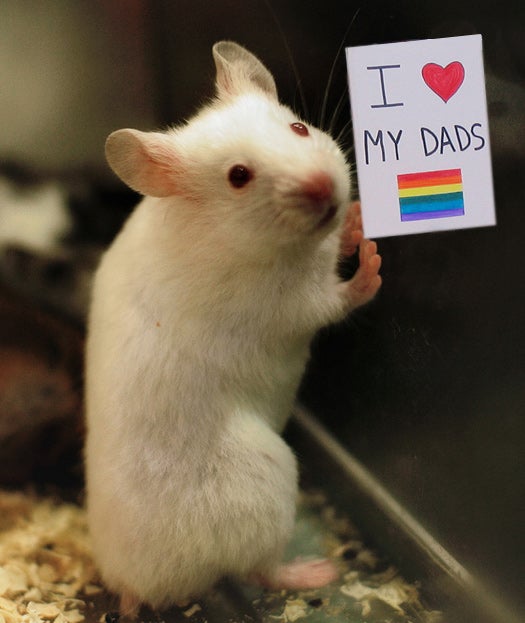 Using stem cell technology, scientists have produced male and female mice from two fathers, a breakthrough that could conceivably allow same-sex couples to have their own genetic children.

The multi-generational technique combines genes from the chromosomes of two male mice and uses surrogate mothers, according to researchers at the M.D. Anderson Cancer Center at the University of Texas.

To produce the male and female offspring, the team first manipulated tissue cells from a male mouse fetus to produce an induced pluripotent stem cell line. Without explaining why, the team says about one percent of these iPS cells spontaneously lost their Y chromosomes, resulting in XO cells. In humans, this monosomy is known as Turner syndrome; girls with the disorder usually have various physical abnormalities and cognitive defects. Normally, people have one pair of sex chromosomes in each cell — women have two X chromosomes and men have X and Y.

The scientists injected the XO stem cells into blastocysts from donor female mice, and these early embryos were implanted into surrogate mothers. When the mothers gave birth, their female offspring were XO/XX chimeras — they had one X chromosome from the original male mouse cells. Finally, the researchers harvested egg cells from these chimeras and mated them with normal male mice. The result was male and female offspring that had chromosomes from two fathers — from the regular male and derived from the stem cells.

The team said their results are a new form of mammalian reproduction, and that it could be used to combine genetic traits from two males without having to involve any women. It could even be possible to produce sperm and eggs from one male, the researchers say.

One day, they might even be able to produce human eggs from male stem cells in a living male. This would eliminate the need to produce XO chimeras, the researchers say.

But don’t worry, fellow XXers: We’re not obsolete, because women will still be necessary to carry the two-father pregnancy to term. At least until they develop a robotic uterus.