An autopilot system modeled after honeybee flight is faster and more accurate than gyroscope-based programs, according to a new study.... 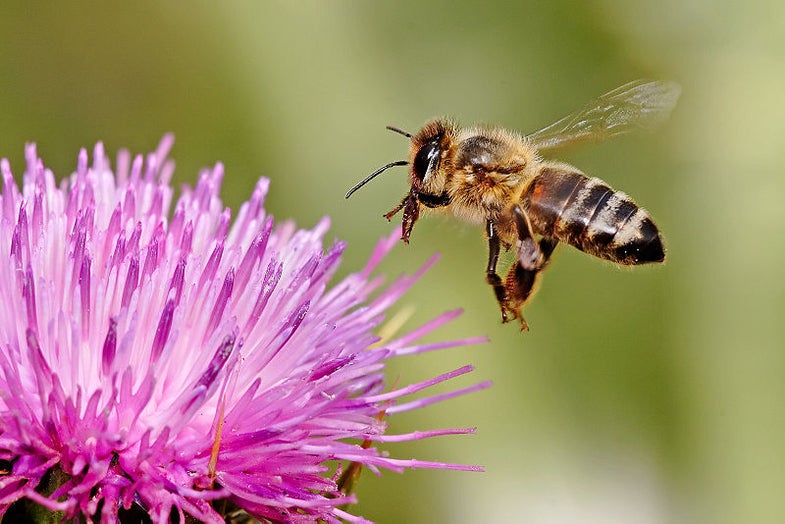 An autopilot system modeled after honeybee flight is faster and more accurate than gyroscope-based programs, according to a new study. By imitating how honeybees sense their surroundings, aircraft can quickly determine which way is up and complete complex aerobatic maneuvers.

Using hundreds of images of the sky and land, Australian researchers developed an algorithm that compares the blue sky to the red-green colors of the ground to determine the horizon. Then they outfitted a UAV with some low-resolution wide-angle cameras, so the aircraft could see 360 degrees of landscape while flying.

They took the UAV to a field and made it fly a barrel roll, a full loop and an Immelmann turn, and it didn’t crash. The aircraft’s perception of the horizon matched the researchers’ observations, according to Saul Thurrowgood, a researcher at the The Vision Centre in Queensland, Australia.

Bees make complex aerobatic maneuvers to reach pollen, communicate the location of food and scout for intruders near their hives. Although researchers are not sure how they do it, they know the bees stabilize themselves by watching the horizon. In a study last year, researchers at the University of Queensland examined honeybees landing on various surfaces, and watched the bees align their antennae nearly perpendicular with the surface before alighting.

Current aircraft use gyroscopes to determine orientation, but this can be unreliable, especially over long distances, according to Thurrowgood. A stabilization method that relies on visual cues could be more reliable. The key is finding out how low-res it can go — lower-res images can be obtained faster, but they might not be as accurate.

The method could conceivably be adopted for a wide range of aircraft, Thurrowgood said. The research group is presenting a paper on their findings this week at the 11th Australasian Conference on Robotics and Automation.