It’s still hard to know just how big an Atlantic hurricane is going to get or where it might make... 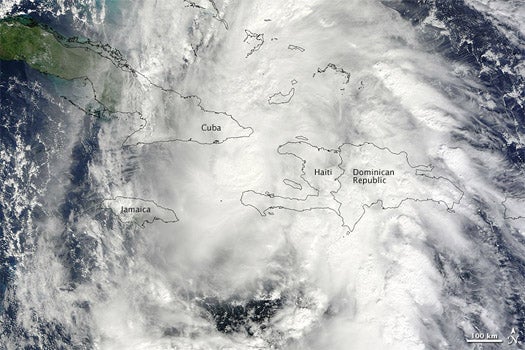 It’s still hard to know just how big an Atlantic hurricane is going to get or where it might make landfall until just days before it strikes, but meteorologists have long been able to predict with fair certainty how many hurricanes will be spawned in the next hurricane season. Now a team of English researchers may have just extended those predictions to include not just the upcoming season but the upcoming decade with better models that can foretell several years out how many hurricanes there will be each year.

Climate modelers at the Met Office Hadley Centre in Exeter, England, are using decadal climate prediction to take into account both how climate systems vary internally and external factors like volcanic eruptions and greenhouse gases and blending that with what meteorologists know about the cyclical nature of hurricane behavior to create better models.

Hurricane activity waxes and wanes over multi-decade cycles – we’re currently in an active period, as you may have guessed – and as such the researchers can use historical data to look at probable activity levels, then further refine those predictions using data on external factors. The researchers have used their model to “hindcast,” plugging historical data going back to 1960 into their models and seeing how it predicted activity over following decades.

Averaging across nine different versions of their decadal prediction model, the team found that they could very accurately predict the number of hurricanes that would occur the following season. But moreover, they found that when they tried to predict the number of storms each year for a coming decade they also came in reasonably close, especially for the first few years following the date of prediction.

The model fails to show exactly why some years spawn more hurricanes than others, but it can help countries and cities be well prepared for storms during years when increased activity is expected. And because the models take into account external factors like greenhouse gas levels, their use should help researchers zero in on specific causes driving hurricane formation and dangerous weather spikes.

Now if we could only devise a means to slow or even stop them altogether.