The rich, creamy red meat of the bluefin tuna is prized almost to a cultish degree — at Tokyo’s Tsukiji... 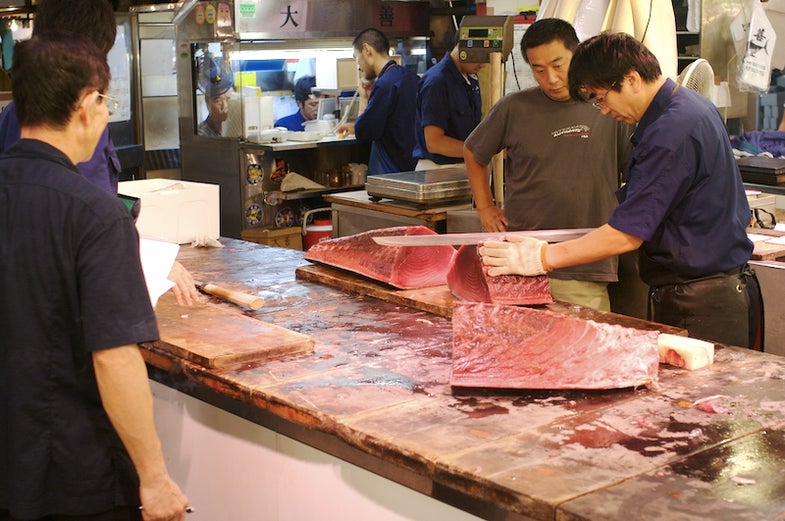 The rich, creamy red meat of the bluefin tuna is prized almost to a cultish degree — at Tokyo’s Tsukiji fish market, a single majestic specimen can sell for over $100,000 — and as a result the species is severely overfished and endangered. Farming the fish, which might offer a solution, has proven remarkably difficult. After years of experimentation with sexy mood lighting, Australia’s Clean Seas company only managed to get them to breed in captivity by injecting them with spear guns full of reproductive hormones. Now, a European initiative has announced an alternative.

The Selfdott project reports the first success breeding Atlantic bluefin tuna in floating cages without the use of hormones. True, the hatchlings all died within months, but the fish experts are confident that a change of diet will fix that next time.

Fish farming has the potential to offset the damage done to natural tuna populations by extreme overfishing. The caged fish are even likely to make tastier sashimi than wild ones, since they can be fattened as much as is desired. But it’s not a panacea by any means.

Tuna is one of the most environmentally punishing fish to farm, in part because the fish takes a decade or more to mature. During this time, the captive fish are fed massive amounts of smaller wild fish — an estimated 20 tons of food fish goes into each ton of tuna produced — so those prey species may become depleted in turn. The farms also produce high concentrations of fish waste, polluting the area around the farm, and can be breeding grounds for piscine diseases and parasites like sea lice.

If only Thunnus thynnus wasn’t so delicious.