UK researchers seeking to cut back on greenhouse gases have found a deliciously potent weapon for fighting agricultural methane emissions:... 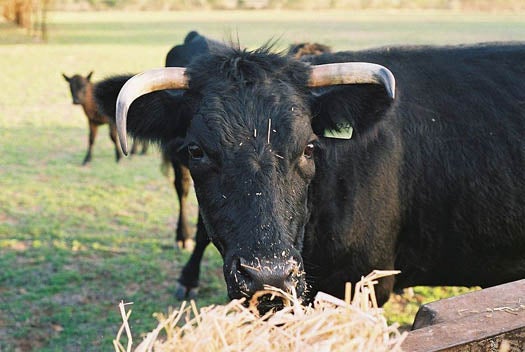 UK researchers seeking to cut back on greenhouse gases have found a deliciously potent weapon for fighting agricultural methane emissions: curry. It turns out two spices customarily used to season curry dishes — coriander and turmeric — have an antibiotic effect in the stomachs of sheep and cows, killing methane-producing bacteria there. By spicing up animal feeds, farmers could reduce methane emissions from farms by up to 40 percent.

Methane, of course, is one of the more damaging greenhouse gases, and while it doesn’t exist in the same quantities as carbon dioxide, it is more than 20 times more powerful in terms of contributing to the greenhouse effect. Through belching, a single sheep emits about 0.7 cubic feet of methane per day. Cows are much more of an ecological nuisance, each belching nearly 18 cubic feet of methane into the air per day.

Aside from that, the methane-making process takes energy from the food and diverts it to the making of the gas, sapping the nutritional takeaway from each bite of food an animal takes. But in tests involving five curry spices, researchers at Newcastle University discovered that ground up coriander added to an in-vitro solution mirroring that found in the stomachs of sheep and cows caused a 40 percent reduction in methane production. Turmeric reduced methane by 30 percent, and cumin by 22 percent. Clove and cinnamon were also tested, but were less effective.

The spices reduce methane emissions by acting like an antibiotic, killing off the bacteria that break food matter down into methane while letting “good,” non-methane-producing bacteria thrive in its place. The same effect could be achieved using traditional antibiotics, but in a marketplace that is increasingly wary of additives and pharmaceuticals getting mixed up in the food chain, the curry solution is a simple, safe alternative.

The bacteria tested was taken from a sheep’s digestive system, but the guts of sheep and cows are so similar that the researchers are confident the results will be duplicated when they test on cows and even goats. The study fails to note whether curry spices cut down on methane production in human digestive systems, but previous unscientific experiments conducted around PopSci HQ suggest you shouldn’t bet on it.