Though many scientists hailed the results last week, some geneticists expressed doubt about a study that linked several genes to... 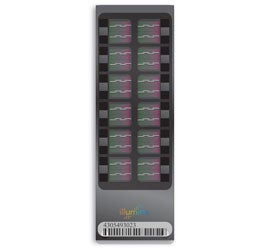 The HumanOmniExpress bead chip can be used for genome-wide association studies (GWAS) like a controversial study reported in Science last week. At least one geneticist says the 610-Quad chip -- which is similar to this one and also manufactured by Illumina -- has a particular quirk that may have resulted in false positives. Illumina
SHARE

Though many scientists hailed the results last week, some geneticists expressed doubt about a study that linked several genes to extreme old age. Now, at least one expert is saying the DNA analysis chips used to conduct the study may have led to faulty results.

The study authors defend their work, but said in a statement Wednesday afternoon that they were re-examining their analysis.

The HumanOmniExpress bead chip can be used for genome-wide association studies (GWAS) like a controversial study reported in Science last week. At least one geneticist says the 610-Quad chip — which is similar to this one and also manufactured by Illumina — has a particular quirk that may have resulted in false positives.

Specifically, Newsweek quotes an Icelandic geneticist who says the DNA analysis chip used for part of the study, the 610-Quad, has a quirk that can lead to false positives.

Kári Stefánsson, who founded deCode Genetics, says the quirk is related to two of the strongest genetic variants linked to aging in the study, called rs1036819 and rs1455311.

Newsweek reports: For any given gene, a person will have two alleles, or forms of DNA. In the vast majority of people, at the rs1036819 and rs1455311 locations in the genome, these pairs of alleles consist of one “minor” form and one “major” form. But the 610-Quad chip tends to see the wrong thing at those particular locations, according to Stefánsson.

The study in question found a pattern of genetic variants among people who lived to be 100 or older. The researchers, based at Boston University School of Medicine, built a model based on that genetic signature, and found it could predict longevity with 77 percent accuracy.

Scientists said the study, published in Science, was a breakthrough in understanding how genes affect human life spans.

But others immediately cried foul. Newsweek also quotes a Duke University geneticist, David Goldstein, who notes the researchers used different DNA chips to analyze the control group and the study group. The chips were manufactured by the same company, but they use different methods — one studies 370,000 genetic variants and the other, the 610-Quad, studies 610,000 variants. The authors explain they had to change chips midstream because the 370 chip went off the market. Only about 10 percent of the people in the study were examined with the 610 chip.

Goldstein tells Nature.com that using different chips, or even the same chips in different labs, can influence the data. Some experiments turned up variants that seemed to be associated with a specific trait, but were actually due to slight differences in experimental conditions, he says.

Other concerns included the small sample size — the BU team looked at 800 centenarians — and the surprising accuracy of the model, at 77 percent.

The BU researchers stand by their findings, they said in a statement Wednesday afternoon: “We have been made aware that there is a technical error in the lab test used on approximately 10 percent of the centenarian sample that involved the two of the 150 variants. Our preliminary analysis of this issue suggests that the apparent error would not effect the overall accuracy of the model. Because the issue has been raised since the publication of the paper, we are now closely re-examining the analysis.”

They add that their statistical model holds up despite the small sample size.

Ultimately, further studies will be needed to clarify the findings. Some geneticists say they’re reserving judgment until the results are duplicated in a larger group of test subjects, such as a European group of 2,500 nonagenarian sibling pairs, according to Nature.