Unleashing a Swarm of Augmented-Reality Cockroaches to Fight Bug Phobias

It’s a well-known tenet of psychology that to overcome your fears, you have to face them. But in some cases,... 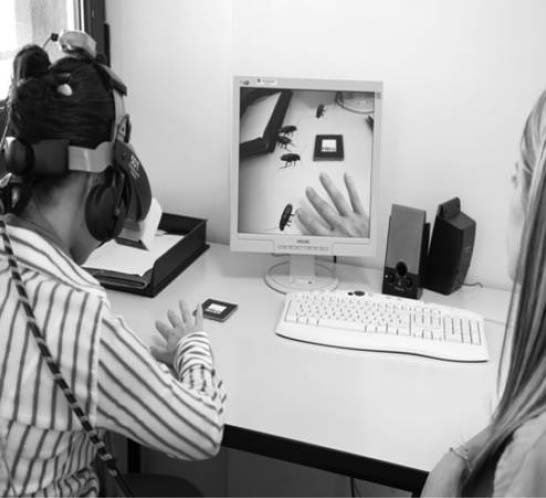 It’s a well-known tenet of psychology that to overcome your fears, you have to face them. But in some cases, that’s difficult or even impossible to do — how do you face your fear of falling, for instance? According to a new Spanish study, augmented reality could provide an answer.

An augmented reality system did a bang-up job of freaking out people with cockroach phobia, the study says. No word yet on whether it helped the patients overcome those fears — so far, the goal was simply to find out whether an AR system could sufficiently induce anxiety.

Participants sat at a desk with a computer, wearing a virtual reality headset. The headset had a camera, so the person wearing it would see a video of the desk she was looking at — but covered in virtual cockroaches. Six female study participants reported extremely high anxiety levels when presented with the simulated cockroaches, notes Richard Landers, an industrial psychologist at Old Dominion University, who writes about the technique on his blog.

As Landers points out, the patients’ high anxiety levels are a good sign for the future of augmented reality. If the simulated roaches produced the same symptoms as real ones, other phobias could be treated with the same technology. Exposure therapy could then be used for phobias that would otherwise be too dangerous or unhealthy to treat, like fear of falling or of dead things.

In the study, a therapist would control how many cockroaches a patient was ready to see, gradually increasing the number of them over several therapy sessions. Over time, the patient would see more and more cockroaches, but nothing bad would ever happen to him or her. Eventually, voila — phobia cured.

The same system has already been used to treat phobia of small animals, the authors say. On behalf of the roach patients in this study, here’s hoping it cures them as efficiently as it scared them.