Stowaway Earth Microbes May Survive on Mars, Contaminating the Search for Life

Relax, David Bowie: in all likelihood there is life on Mars. Unfortunately for those of us hoping to find organic... 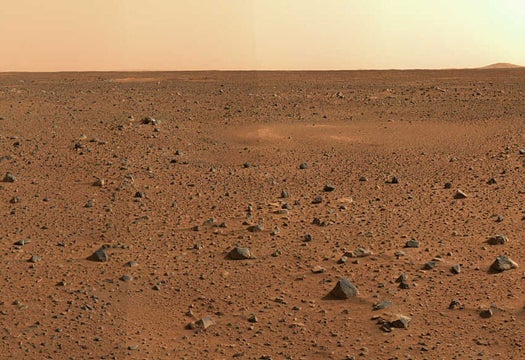 Relax, David Bowie: in all likelihood there is life on Mars. Unfortunately for those of us hoping to find organic life forms thriving elsewhere in our solar system, there’s a reasonably good chance the microbial life we might someday find on Mars was put there by us.

Searching for life — or signs that it once existed — on Mars is one of NASA’s primary objectives when it comes to exploring the red planet. So when we launch probes at the surface or pack up rovers like Spirit or Opportunity for deployment on the surface, it’s protocol to swab everything down so as to keep Mars pristine.

But a recent study coming out of the University of Central Florida showed that some microbial communities common on spacecraft can survive both the sterilization process on Earth and the hostile conditions on Mars. Replicating the Martian environment, the researchers showed during a week-long study that bacteria like E. coli — a common stowaway on spacecraft — can likely survive a space launch scenario. If shielded from radiation inside the nooks of a spacecraft or deposited beneath the Martian soil, it could conceivably live there, though it likely wouldn’t reproduce.

But E. coli isn’t the only candidate. Other common (and often nasty) microbes like acinetobacter, bacilus, streptococcus and staphylococcus might also survive the sterilization process and live on in a Martian environment. Which means we may have already contaminated the Martian surface, and if we haven’t, there’s a good chance we will as we conduct more exploratory missions there.

But there are two sides to this coin. Though we’d like a pristine Martian environment in which to conduct experiments and search for life organic to that planet, it’s somewhat exciting to know that microbial survival is indeed possible on Mars. If we can contaminate it, we can seed it, setting the stage (potentially) for humans to create microbial environments that can persist — and proliferate — on Mars. Let’s just hope our first contact with life on another planet isn’t a nasty case of strep throat.