Come on, you apes! You wanna live forever? 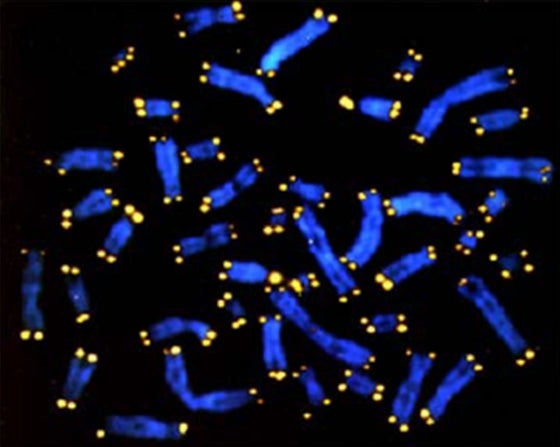 Humanity’s search for the secrets to immortality has inspired Ray Kurzweil’s Singularity vision and DARPA’s hunt for ageless synthetic beings. Now scientists have discovered a single gene that appears to control how quickly individuals will biologically age, The Telegraph reports. The discovery could not only encourage people to adopt healthier lifestyles earlier, but may eventually help people live longer if scientists can figure out how to manipulate the gene.

Each person has a genetically-programmed lifespan that depends upon telomeres, or the ends of chromosomes that serve as protective caps for the main genetic material. Biological aging is determined by how quickly the telomeres shorten each time the genetic material is copied during cell division — a process that parallels human aging.

A newly-identified variant of the TERC gene seems to determine both the starting length of a person’s telomeres and how quickly the telomeres shorten. The full findings appear in the journal Nature Genetics.

The scientists have yet to try and manipulate the gene to possibly delay biological aging, but they suggest that people could get tested for the gene early on in life. People could then take appropriate steps to avoid proven “bad” influences on those precious telomeres, such as smoking, obesity and lack of exercise.