New Battlefield Drug May Save Soldiers Dying from Blood Loss

People who suffer massive blood loss automatically go into shock as a stopgap measure, but can eventually die if their... 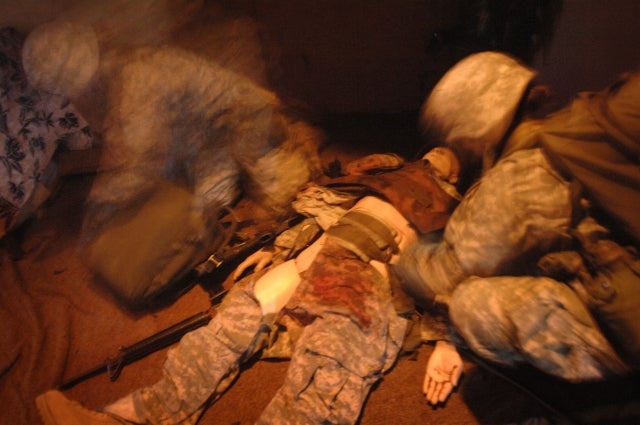 People who suffer massive blood loss automatically go into shock as a stopgap measure, but can eventually die if their bodies stay in shock for too long. Now a drug used to treat epilepsy could reverse all that and boost survival rates for horrifically injured people, especially wounded soldiers far from any extra blood supplies. New Scientist reports on a new study of the drug that involved porkers.

Valproic acid has improved survival rates among lab rats in the past by acting as an inhibitor that prevents removal of acetylation chemicals in the body. That in turn keeps several “survival pathways” turned on that would otherwise shut down as a body goes into shock — increasing heart rate and shutting down expression of certain proteins may help a wounded person in immediate aftermath, yet can lead to organ failure and death after a short period.

The latest study of valproic acid involved anesthetized pigs. Researchers drained 60 percent of the blood from the pigs, and then split them into groups. Some pigs received injections of the drug, while others received saline solution or a blood transfusion.

About 86 percent of pigs that received a valproic acid injection survived in comparison to just 25 percent of pigs in the saline solution group. Blood transfusions naturally still proved best, with a 100 percent success rate.

Battlefield medicine has improved dramatically over the past century, but wounded soldiers may still die before they receive proper medical treatment. The Pentagon’s DARPA science lab has pushed hard for improving warfighter survival, whether it’s testing a self-regulating morphine drug or creating drug cocktails that put soldiers into suspended animation.

We’re still somewhat far from putting humans into stasis to save them, but the shock-reversal drug could see human trials by the end of 2010. Researchers first want to repeat the pig trial and ensure that valproic acid does not hinder longer-term survival.