Robot Designed To Kill Starfish Will Be Released On Australian Reefs Thursday 27 August 2015. Pictured from left to right are Matt Dunbabin and Feras Dayoub with the COTSbot robot which is designed to search for and kill Crown of Thorns Starfish. Photo:QUT Marketing and Communication/Erika Fish. PH:0731385003. Erika Fish
SHARE

Without any direction from humans, the robot sees its target and zeroes in. It administers a lethal injection before its victim can flee, then seeks out the next hit. It sounds like the plot of a Terminator movie, but this robot is far from fiction. Meet COTSbot, a robot designed to identify and systematically eliminate Crown of Thorns Starfish (COTS) from coral reefs. 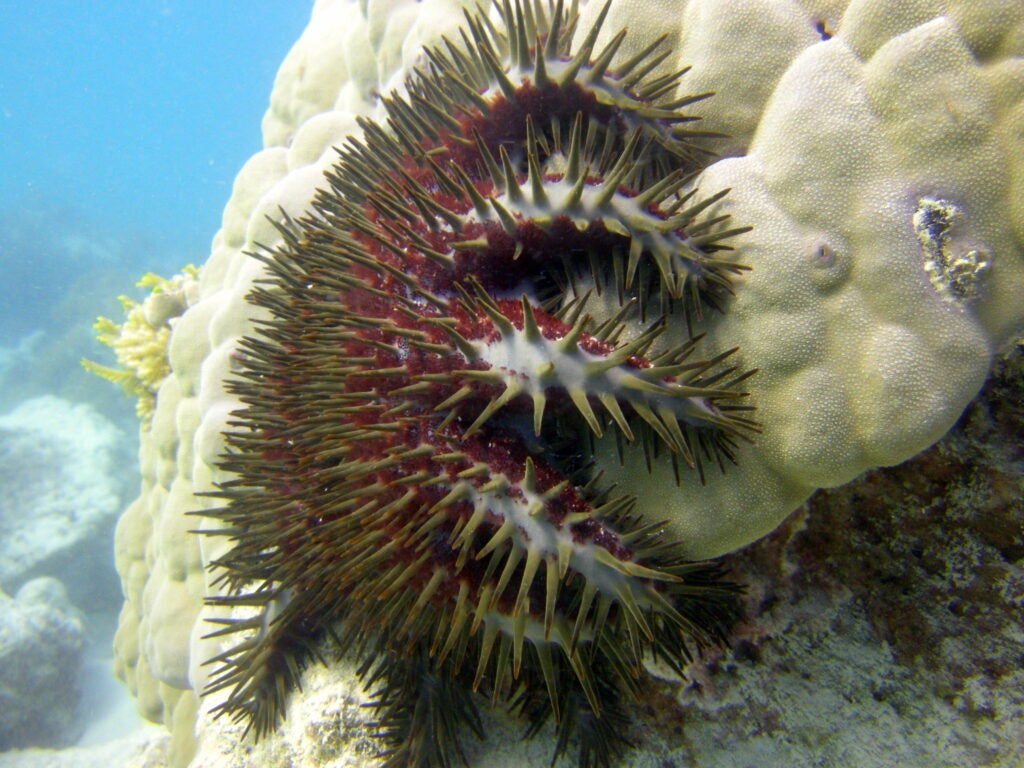 A crown of thorns starfish seen on coral.

COTS are an incredibly destructive species that literally eats away at coral reefs, including the embattled Great Barrier Reef.

“Human divers are doing an incredible job of eradicating this starfish from targeted sites but there just aren’t enough divers to cover all the COTS hotspots across the Great Barrier Reef,” Matt Dunbabin, the creator of COTSbot said in a statement. “The COTSbot becomes a real force multiplier for the eradication process the more of them you deploy — imagine how much ground the programs could cover with a fleet of 10 or 100 COTSbots at their disposal, robots that can work day and night and in any weather condition.”

Dunbabin came up with the idea a decade ago, and started working on a project, but at that time, the only way to kill COTS was to either remove them from the reef or inject them 20 times with a poison that would kill the starfish, but not the rest of the delicate ecosystem. Then, researchers found a way to kill COTS with a single shot. The weapon of choice is a dose of bile (digestive liquid), which kills the starfish, but not other animals in the area.

Dunbabin and Feras Dayoub, both from the Queensland University of Technology, programmed COTS with the ability to see and distinguish COTS from other sea life. COTSbot can work for 8 hours a day, and kill up to 200 starfish in a single dive. It will be tested later this month (watched over by humans to make sure it doesn’t choose innocent, fishy bystanders), and then will hopefully be released onto the Great Barrier Reef in December.