Everything you need to know about the Samsung Galaxy S22 phones 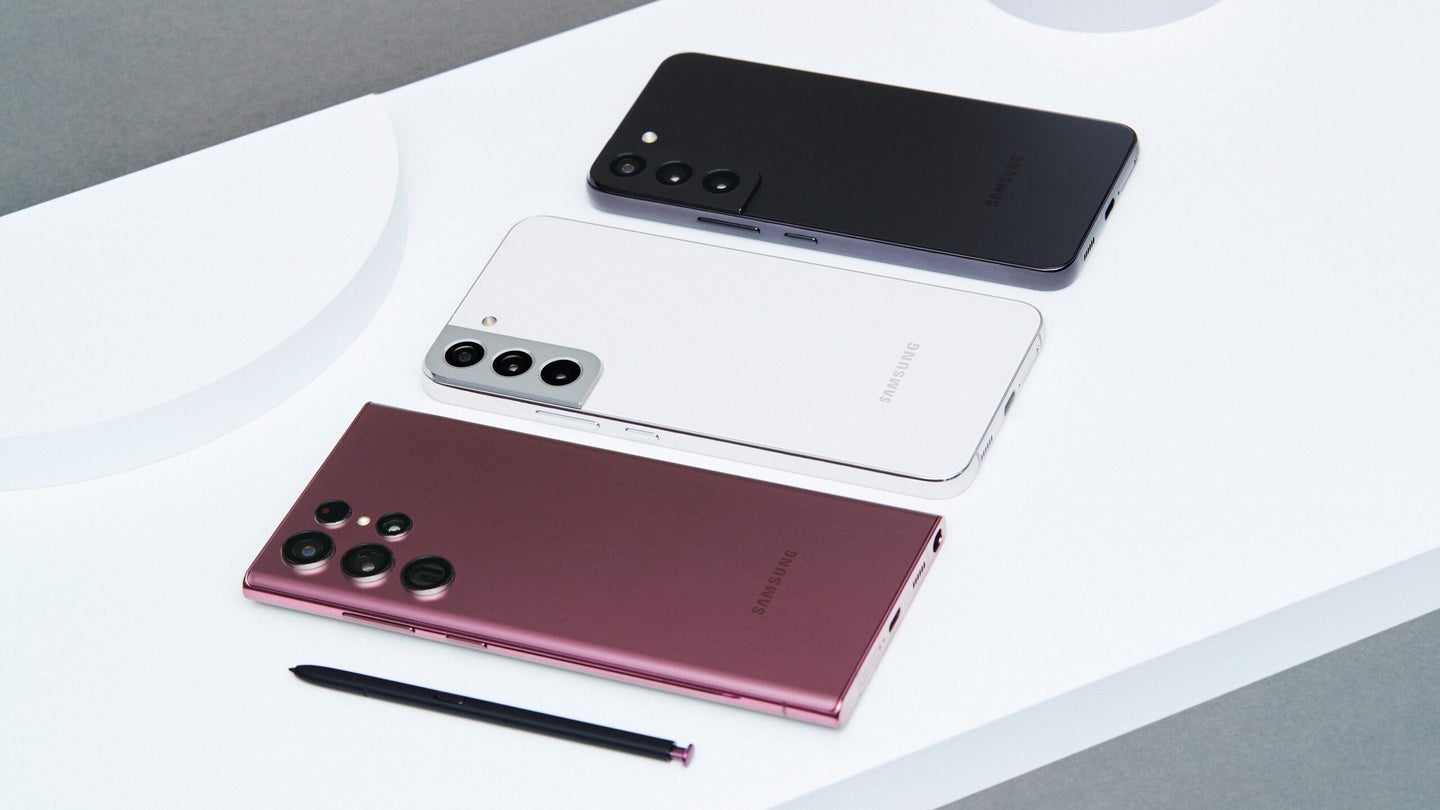 Samsung announced three Galaxy S22 smartphones, the next generation of its immensely popular Android phone line, during its Galaxy Unpacked live stream, held Wednesday, Feb. 9. As in past years, the S22 line will include three different devices: the standard 6.1-inch Galaxy S22, the larger 6.6-inch Galaxy S22 Plus, and the extra-large 6.8-inch Galaxy S22 Ultra. This year, Samsung has lumped the S22 and S22 Plus together as a single phone in two sizes, which hasn’t changed all that much compared to the Galaxy S21 line. The Galaxy S22 Ultra, on the other hand, has received an aesthetic and philosophical overhaul. The S22 Ultra, always the largest and most powerful Galaxy, has now evolved into a stylus-focused design, similar to Samsung’s now-defunct Galaxy Note. According to Samsung, the S22 is a “best of both worlds” situation where you get the control of the Note and the superior cameras of a Galaxy flagship.

As far as new features go, you’ll mostly see a bevy of small changes across the line, many of which stem from software upgrades as much as hardware. While they may not be the most revolutionary phones we’ve ever seen, there are always a few cool features worth examining.

The Galaxy S22 Ultra straightens up

To distinguish it from the other, more conventional S22 phones, the S22 Ultra features a square design with rounded sides. Its hard corners create a thin oval shape, which kind of looks like a battery pack in the right light. It features a 1440 x 3088p 6.8-inch AMOLED 2X display, which can output at up to 120Hz. You’ll also notice that, while there are the camera lenses on the back create sizable lips, the S22 Ultra ditches the squared-off metallic camera bump panel on the S21 and other S22 models

The S22 and S22 Plus look much more like last year’s models. The S22 and S22 Plus also feature AMOLED 2X displays, but only reach a 1080 x 2340 resolution, albeit at the same dynamic framerate, which tops out at 120Hz. It features a monotone camera bump, similar to the recently released Samsung S21 FE.

That said, all of the devices still have a lot in common. All three feature an “under-display” pinhole camera hole-punched at top-center. They’re all made from “Armor Aluminum” and Corning Gorilla Glass Victus+ for enhanced durability. Though you wouldn’t mistake the Galaxy S22 Ultra for a standard S22 or an S22 Plus, it hasn’t deviated so far afield that it looks like a different phone.

The Galaxy Ultra S22 now comes with a “built-in” Samsung S Pen stylus, complete with a holster slot at the bottom of the phone. (You can use an S Pen with the Galaxy S21 Ultra, but it is an optional accessory.) While the S Pen is a known quantity, the S22 Ultra will feature enhanced support for the Pen, including dramatically reduced input latency. The phone uses an “improved” coordinate prediction algorithm, which can anticipate the direction of your pen strokes to process them faster, enabling smoother writing and drawing. Samsung also improved the handwriting-to-text recognition software, making it more likely it will be able to translate sloppy handwriting (like mine).

The S22 and S22 Plus are not compatible with the S Pen, so if you like the idea of handwriting notes on web pages and doodling on your phone, you will need to get the Ultra.

Camera growth in fits and spurts

Cameras are always the central feature of the Galaxy S—and all modern smartphones, really. This year, the S22 and S22 Plus get a major pixel bump in their primary, wide-angle cameras, as well as enhanced sensors across the line that should make the S22 especially good at night shooting.

The Galaxy S22 Ultra features a very similar set of cameras as the S21, but with a few added tricks. It has four cameras on the back, a 108MP wide-angle lens, 12MP ultrawide lens, 10MP telephoto lens, and dual 10MP under-camera lenses. The rear cameras can shoot video in 8K at 24fps or in 4K at 60fps. The pinhole camera on the front is 40MP, capable of shooting in 4K at 60fps. If you look at the camera bump, it kind of looks like there are five cameras: That extra circle is actually a laser auto-focus sensor, which helps the phone do some of the multicamera photography tricks that help even novice photographers get sharp photos.

These lenses are identical to the S21 Ultra at a glance but feature a 23-percent-larger sensor, which allows them to shoot much better photos and video in low-light situations. (Samsung calls it “nightography.”)

On the S22 and S22 Plus, you have a 50MP wide-angle lens, 12MP ultra-wide lens, single 10MP telephoto lens on the back, and a 10MP front camera. That’s a big jump compared to the 12MP wide-angle camera. As we mentioned, that’s a really large jump for the primary lens on the S22, which will hopefully lead to sharper photos, even if it still doesn’t quite compete with the tremendous number of pixels used in the Ultra’s images.

Beyond that, the phone features a few software-enabled camera tricks that further enhance photos and video, especially for casual photographers, thanks to a new and improved version of the Galaxy’s AI-enabling Neural Processing Unit (NPU), which Samsung claims is twice as fast as one in the S21 series. Building on the Pixel binning in the S21, the S22 Ultra features nona-binning, which can enhance a photo’s resolution by processing pixels in larger composite groups. Samsung claims that, by synthesizing images taken from the different cameras, you will achieve brighter, sharper photos.

The cameras also feature a new auto-focus feature, which will adjust the camera to center around as many as 10 subject faces. As with tech we’ve seen in smart screens and other devices, the camera will use its zoom and wide field-of-view to automatically adjust follow a subject when recording video. “Auto Framerate” adjusts the framerate of a video, optimizing it for the lighting conditions in the video. There are also “Super Steady System” and “Super HDR” features, which smooth out shaky video and further brighten photos, respectively.

For expert photographers, Samsung has a new photography app, Expert RAW, which allows you to make more detailed edits directly after shooting. As per the name, S22 Ultra can also save 16bit RAW files with the app, allowing for pro-level post-camera editing.

All three Galaxy S22 phones feature a new, more powerful 4nm ARM microprocessor, which Samsung claims to be the fastest chip used in a Galaxy device. As on the S21, this includes Samsung Knox Vault, a dedicated security chip to store encrypted personal information and password. They also reportedly feature fast-charging batteries—3700mAh for the S22, 4500mAh for the Plus, and 5000mAh for the Ultra—which can charge from 0 to 50 percent in less than 20 minutes. Connectivity is another exciting wrinkle: The S22 Plus and Ultra will feature Wi-Fi 6E support, allowing for ultra-high speeds at home for those who have access. The S22 will support Wi-Fi 6. And, of course, all three continue to support 5G mobile broadband so you’ll get the fastest speeds possible from your wireless carrier.

When can I get the Samsung Galaxy S22?

The Samsung Galaxy S22 Ultra comes in four variations, starting at $1,199.99 for a model with 8GB and 128GB of storage. (Crucially, the three more expensive models all feature 12GB of RAM, in addition to extra storage.) The Ultra comes in four similar colors: White, Black, Green, and a very pink-looking Burgundy.

All of the phones will ship to preorder buyers and hit stores on February 25. Prior to the announcement, rumors suggest that the phones will be very difficult to acquire at launch due to supply chain issues, so give up if you have trouble finding one on launch day.