When summer rolls around, and friends and family roll up, you’ll want only the best backyard games to occupy kids of all ages 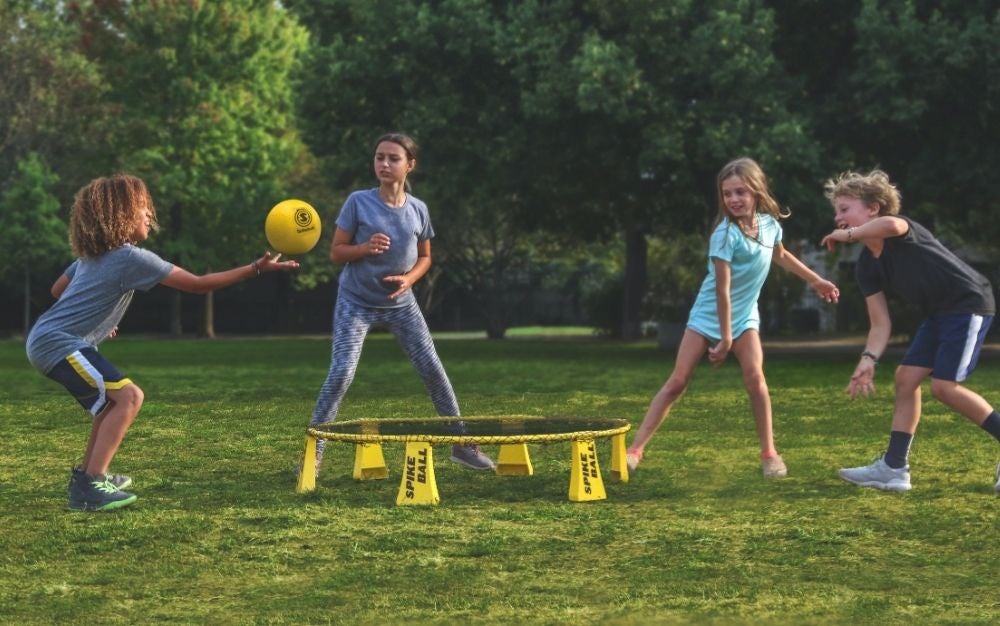 When the weather warms up and the sun starts shining, it’s time to find any excuse to take things outside. Your lonely lawn has waited all winter to play host to fun and games. From traditional cornhole boards to innovative, new outdoor party games, there are plenty of outdoor games for kids, outdoor games for teenagers, and abundant options for adults as well. Whether you want to spice up a BBQ, supplement a pool party, or just break up the monotony of a random weekday, we’ve got something that will fit the bill. And don’t worry if your outdoor space is limited: we’ve included the best backyard games that’ll work even if you only have a few square feet of space to work with.

Where do the best backyard games come from?

Outdoor yard games like lawn bowling date all the way back to Medieval England. Even state fair favorites like cornhole could be found in 14th century Germany, and Roman Centurions likely amused themselves with games of horseshoes. Some of these games remain the best backyard games out there; those Medieval Europeans really knew how to use a lawn.

So-called “backyard games” have become so popular, in fact, that some have earned professional league status. The NHPA (National Horseshoe Pitchers Association) was formally organized nearly a century ago, in 1926. The World Wiffle Ball Association, a newer creation, dates its inception to 1980. They join activities like badminton, croquet, and even Ultimate Frisbee as games that owe their start to backyards and inventive players. From the tried and true to new twists on old games to entirely new activities, there exists a vast well of lawn and yard games for adults, kids, and the whole family. Here are our selections for the best backyard games.

Related: Is your favorite game televised? Watch it on the patio with the best outdoor TVs.

It’s been a staple of state fairs and playgrounds for as long as any of us can remember, but where did cornhole actually start? There’s no definitive history and there have been a lot of claims to its invention, but the most commonly cited theory is that cornhole was created by a 14th-century German cabinetmaker by the name of Matthias Kuepermann. Kuepermann was said to have watched some children toss rocks into a nearby groundhog’s hole and was concerned for their safety. So he utilized his carpentry skills and designed a safer game for them to play by fashioning wooden boards with holes for targets. So, where does the “corn” come into play? According to the theory, corn was used to fill the throwing backs. Kuepermann felt that a small sack of corn not only had the heft of a rock, but would be much, much safer for the kids. The whole system, presumably, was much safer for the groundhogs.

Constructed of 100-percent solid wood, the GoSports set is durable, easy to set up, and built to last. These cornhole boards come with eight toss bags (four red, four blue), as well as carrying bags. The plain wood facade makes them ideal for customization as well; go nuts with some paint for a personalized look.

How about some croquet?

Like a lot of backyard activities, croquet has a long and circuitous history, but has remained one of the best backyard games due to its ease of play. It may seem a little stuffy, but trust us—it’s fun. That is, as long as you have a proper croquet set. There have been games like croquet, in which a ball is struck along the ground with a stick, since antiquity. Games we’d recognize as croquet were likely first played in 1850 in Ireland, with hoops made of willow rods and mallets constructed from broomsticks, or possibly in France, where it was called “pall-mall.” A hybrid of the two took off in England, and by 1864 croquet equipment was manufactured and used en masse. The first known set rules for croquet were written by Isaac Spratt in November 1856 in London. Around the 1950s, croquet experienced a swell of popularity in the United States, but it remains most popular in England. It can be played anywhere there’s a flat stretch of grass, though.

Not every popular backyard activity has a storied history behind it. If you’re looking for something more modern and innovative, then you might want to consider a backyard game that’s only a few decades (rather than centuries) old. Spikeball was invented by Jeff Knurek in 1989, and originally manufactured and marketed through a Japanese toy company called Tomy. But the original game didn’t gain much traction at first, and eventually Knurek’s original trademark expired. In 2003, a man named Chris Ruder was vacationing in Hawaii when he saw a spikeball set in action, and decided to purchase the trademark, make some upgrades to the original design, and introduce the game to the judges (and viewers) of “Shark Tank.” It has since grown in popularity as a beach, backyard, or lawn game, with rules similar to volleyball or foursquare—you bounce a somewhat floaty ball off a trampoline, aiming to keep it from hitting the ground.

The original “beginner’s” set has everything you need to take up the Spikeball game. This Spikeball set is designed for a four-person game, and comes with an adjustable net with folding legs (for easy storage and travel) and three balls. The whole kit can be easily broken down and transported in the included drawstring bag. It’s great as a lawn game, but it also travels well to the park and beach.

Interested in hitting the birdie around in a game of badminton?

The origins of badminton date back at least 2,000 years. Similar games called battledore and shuttlecock were played in ancient Greece and China, with the key being the unusual “ball,” which isn’t really a ball at all. The shuttlecock, or birdie, is the object hit back and forth, and with a conical shape, it’ll take aerodynamic flight no matter how hard it’s hit. The English name of badminton comes from the ancestral Gloucestershire home of the Duke of Beaufort, though it’s not clear exactly why that name was chosen. Gloucestershire, with an eye to history, is now the base for the International Badminton Federation.

The IBF was formed in 1934 with nine members: Canada, Denmark, France, Netherlands, England, New Zealand, Ireland, Scotland, and Wales. The United States joined four years later. Badminton was played as a “demonstration game” at the 1972 Olympics in Munich, but it wouldn’t be until the Barcelona games in 1992 that badminton would become an official Olympic sport. If you’ve never seen professional badminton played, go to YouTube; it’s surprisingly intense. But it also makes for a mildly competitive and slightly more leisurely backyard game.

This Franklin badminton set has everything you need to get started if you’re a badminton newbie. The set comes with two birdies, an adjustable net, and four steel rackets. It’s designed for quick and easy set-up, and the entire package can be neatly stored in and transported via a handy carrying case.

Not everyone has the space or inclination for a big setup like badminton or croquet. Luckily, there are plenty of less expensive and involved lawn games to choose from that’ll still provide plenty of outdoor fun. Outdoor games from horseshoe to darts and more make it easy to have fun without spending a lot of money.

Horseshoes is a backyard classic, and you don’t need much to get started. The Champion Sports set is under $20, and comes with two rubber mats with pegs, two plastic dowels, and four rubber horseshoes. Even if you don’t have a lot of space, you can set these up easily and play just about anywhere.

Q: What should I play in my backyard?

Everyone has their own preferences as to what to play in the backyard. Cornhole is a classic yard game option for a reason: it takes minimal time and effort to set up, and provides a great combination of relaxation and competition. It’s a perfect standing-around, hanging-out game that can be played at a leisurely pace, and it even pairs well with barbecue (and beers, for the adult participants).

Q: What are fun games you can play outside?

There are lots of fun games you can play outside to take advantage of the warm months. In addition to games like cornhole or badminton, which require some equipment and set-up, you can also play simpler games like hopscotch (all you need is some chalk), double-dutch (just grab a jump rope), or tag (no equipment needed). There’s an endless amount of outdoor activities that just require a little imagination.

Q: How can I make my yard more fun?

A good way to amp up the fun in your yard, beyond just yard games, is to make the whole yard a little more festive. This can be achieved in a lot of ways that don’t necessarily have to cost a lot of money. We’d recommend strings of lights, festive lanterns, fire pits, and plenty of comfortable seating.

Related: Take it to the next level with these giant backyard games.

The key to finding the right backyard or outdoor games for you and your family is knowing what kind of outdoor space you have to work with, how many people you hope to entertain at one time, and what you and your friends and family enjoy doing. Do you like simple, relaxing activities, or do you like high-energy games? Are you intensely competitive, or do you just want something to help pass the time in a fun and healthy way? Answering these questions will ensure you pick the perfect game to keep you and yours amused, engaged, and, above all, outside enjoying some glorious weather.