Pumping Up A Gene For More Gasoline

Toxicity management is a common problem in biology. In the human body, toxins are removed through a combination of biochemical... 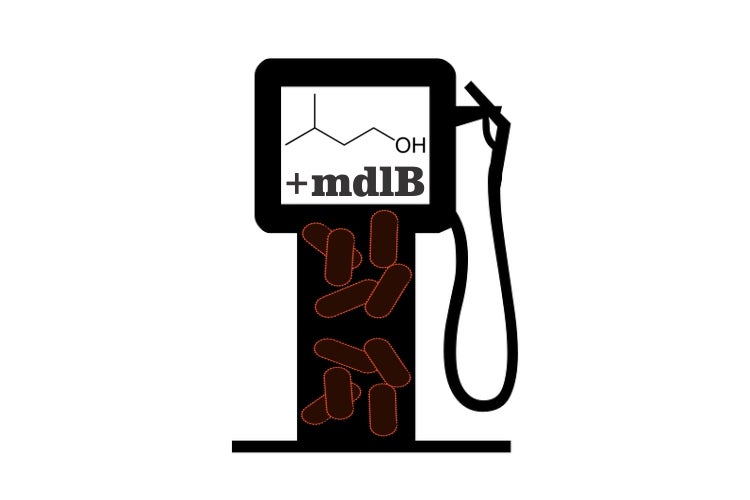 Toxicity management is a common problem in biology. In the human body, toxins are removed through a combination of biochemical processes and transport mechanisms leading to the production of sweat, urine and fecal matter. In a bacterium, the process is far more simplified. Unwanted molecules are identified, captured, and then transported out of the cell such that they can no longer cause harm. The phenomenon is better known as efflux.

Efflux pathways have been identified and elucidated for a number of potential microbial toxins ranging from heavy metals to antibiotics. When these actions are increased, the efficiency of export is improved. The overall result is a strengthened tolerance of whatever might be in the cell.

From a bioengineering perspective, this is good news. A hyped up efflux system can improve the production of chemicals without fear of losing the bacteria to toxic effects. This is especially important in the formation of organic solvents and in particular, biofuels. With an effective means to send these at times lethal chemicals outside the microbial intracellular space, bacteria effectively ensure their survival.

Over the last few years, one particular molecule, isopentanol (also known as 3-methyl-1-butanol and isoamyl alcohol), has gained significant attention due to its rapid production in bacteria. This short chain alcohol has proven itself to be important as a precursor to many different industries ranging from pharmaceuticals to industrial chemicals to flavor compounds such as isoamyl acetate, which offers a banana aroma. But its true promise lies in its ability to act similarly to ethanol as a ready-to-use biofuel.

The process of making isopentanol in a bacterium was initially reported in 2008 using the most common species for bioengineering, Escherichia coli. At the time, the process was considered to be a breakthrough although not ready for upscaling. By 2012, a synthetic pathway was discovered such that mass production of the compound could be engineered into the bacterium. Yield was dramatically increased as was the potential for even greater expansion.

Yet there was still a concern. Increasing the size and capacity of the microbial factory would be great initially but as the microbes churned out their product, they risked suicide due to the toxic effects of the product. Though they would perform their duties effectively, they would end up dying on the job long before their time.

The levels of toxicity for isopentanol in E. coli range from two to eight grams per liter, far too low for any significant benefit. To account for this, a new direction would have to be found to ensure sustained output at high enough levels. In order to do this, two approaches could be considered. Novel synthetic pathways could be engineered into the cells and tested for any benefit. The other would be to physically stress bacteria in the presence of rising concentrations of isopentanol and observe at the genetic level how the microbes respond.

For a collaborative group of researchers from California and Singapore, the latter option was the best way forward. Last week, they reported on their attempt to identify the specific mechanisms necessary to tolerate the isopentaol toxin and improve production through engineering. As the team learned, providing E. coli with a little bit of stress led to significant and useful returns.

The experiments were relatively straightforward. The team grew up the bacteria and then exposed them to sublethal concentrations of isopentanol. Over the course of 24 hours, they collected samples and analyzed them at the genetic level. If any gene showed an increase in expression relative to a non-exposed control, it would be cloned and engineered into another strain. Then the process would be repeated. While any gene would do, the ultimate goal was to identify one or more genes associated with an efflux pathway.

From the initial tests, 40 possible gene candidates were chosen. As the rounds went on, this was reduced to only eight. To bring this number down even further, the team investigated whether expression led to increased isopentanol production. Six of the eight qualified with one candidate increasing the concentration of the product by 55%.

But while this was all good news, the team still wanted to find an efflux protein. As they continued their experiments, they were rewarded with one gene, putative multidrug ABC transporter, or mdlB. The protein product of this gene is suspected to be a drug transporter and is thought to confer antimicrobial resistance to the bacterium. While this presented a burden for public health due to its contribution to antibiotic resistance, it was a goldmine for the authors. For them, this was the perfect candidate for future study to improve production and increase tolerance.

The identification of the efflux mechanism in this study highlights just how the future of biofuel production will proceed. While identifying pathways to make fuels is imperative, making sure the bacteria continue to be healthy in the process is equally as important. In the case of isopentanol production, the mdlB gene fulfills both needs. First, it will help to ensure efficient production of the molecule is maintained. But more importantly, the gene can act as a rescue mechanism. Should toxicity levels start to rise, this molecule can be triggered to overexpress such that the microbes stay healthy and more importantly, keep pumping the gas.