A primer to the primal origins of humans on Earth

Our history is complicated. Our pre-history, even more so. 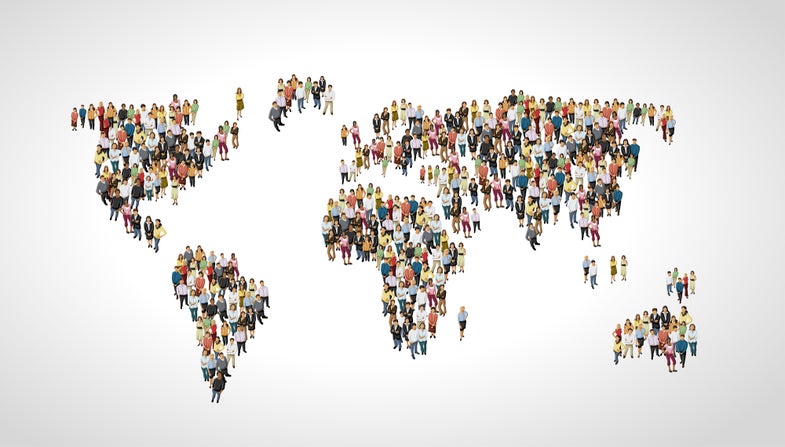 How on Earth did we get here? No, not whatever political or environmental or existential crisis just sprung into your mind. How did our species end up where we are today?

This week, researchers from India announced that they’d found evidence of relatively advanced stone tool development in India dating back 385,000 years, around the same time that similar technologies were developing in Europe and Africa under the hands of early humans. As Scientific American notes, if they’re right, it pushes back the use of those tools in India by 200,000 years, and prompts new discussions and debates as to how exactly that tech developed—did the people there come up with it independently? Was it introduced from somewhere (and someone) else?

200,000 years is a massive jump, but it sometimes seems like discoveries pushing back milestones in human development are happening all the time. That can get confusing. Here’s a very basic cheat sheet of the current research and findings.

How did we spread around the world?

The earliest fossils of humans and their relatives show up in Africa, where they’ve been preserved for millennia, and in some cases, millions of years. But humans didn’t stick to Africa.

Last week, in a paper presented in Science researchers led by Israel Hershkovitz announced the discovery of bones and tools at a site in Israel called Misliya Cave, Mount Carmel. The artifacts and remains were dated to around 180,000 years ago, pushing back the time that members of our species left Africa by 50,000 to 85,000 years.

“Misliya is an exciting discovery,” said anthropologist Rolf Quam, a coauthor of the study in a press release. “It provides the clearest evidence yet that our ancestors first migrated out of Africa much earlier than we previously believed. It also means that modern humans were potentially meeting and interacting during a longer period of time with other archaic human groups, providing more opportunity for cultural and biological exchanges.”

Researchers think that modern humans and other hominins left Africa via the Middle East, taking advantage of the land bridge between Eurasia and Africa.

When did humans show up in the first place?

Modern humans are all members of the species Homo sapiens sapiens. We’re the last hominins standing, having endured longer than other species and sub-species, including H. neanderthalensis (sometimes referred to as H. sapiens neanderthalensis) or neanderthals, perhaps our most famous ancient human relatives. While they didn’t persist to the present, many humans do have Neanderthal ancestors thanks to some ancient interbreeding that passed along some of their genes to us.Researchers are still delving into what traits might be associated with Neanderthals.

Modern humans (H. sapiens) and neanderthals aren’t the only species of humans to have walked the Earth. There are the Denisovans, Homo erectus, Homo habilis and others. One of the earliest accepted members of the human family tree is Sahelanthropus tchadensis which lived roughly around 6.5 million years ago,and likely walked on two legs. Fast-forward a few million years, and Homo habilis arrives. H. habilis was one of the earliest members of our genus and we see fossil evidence of this species dating to 2.4 million years ago in Africa. This was thought to be one of the earliest species to make and use stone tools—hence the name, which means handy man—but earlier evidence of stone tool use has now been found, and some researchers are reconsidering whether or not they should really be included in our genus.

Then there’s us. Early fossils of distinctly H. sapiens individuals have been found in Africa and dated to between 150,000 and 200,000 years ago, mostly in East Africa, but they could have shown up even earlier. Last year, researchers announced that tools and fossils found in Morocco dated to roughly 315,000 years ago. These fossils share some features with Homo sapiens, enough to cause a huge firestorm of debate as to whether or not these fossils count as members of our species, or if they’re close precursors. The discovery may also expand the potential range of our ancestors (or at least, our relatives) beyond East Africa and across the continent.

A lot has changed in the past few hundred thousand years, not in the least because we are now alone, whereas before, humans had a decent amount of company. “Our species shared the world (and interacted) with Neanderthals, Denisovans, Heidelbergensis, and erectus for a very long period of time.” Hershkovitz says.

When did life start on Earth?

This is one of the more hotly contested debates in biology. Researchers are still trying to figure out where and how life began, let alone the time period where our planet shifted from a population of zero to Pop. 1+. When it comes to timing, the scales of the evidence that biologists are looking for is nearly impossible to comprehend. They’re looking for fossils that have not only managed to survive for billions of years, but that were also left behind by lifeforms the size of bacteria. Given the fragility and tiny size of bacteria and the rate of change on our dynamic planet, it’s incredible that they left any physical traces for biologists to find today.

But some examples do exist. One of the oldest fossils that many researchers agree on are microfossils from Australia that clock in at 3.43 billion years old. But other researchers have found fossils that they claim are older. (For more, read Popular Science’s feature from our September/October 2017 issue: A new finding raises an old question: Where and when did life begin?.)

But fossils aren’t the only evidence of the origins of life. Chemical and geological analysis of rocks found evidence that might indicate life going back 3.8 billion years, and maybe even as far back as 4.1 billion years.