Hope you've saved up your quarters 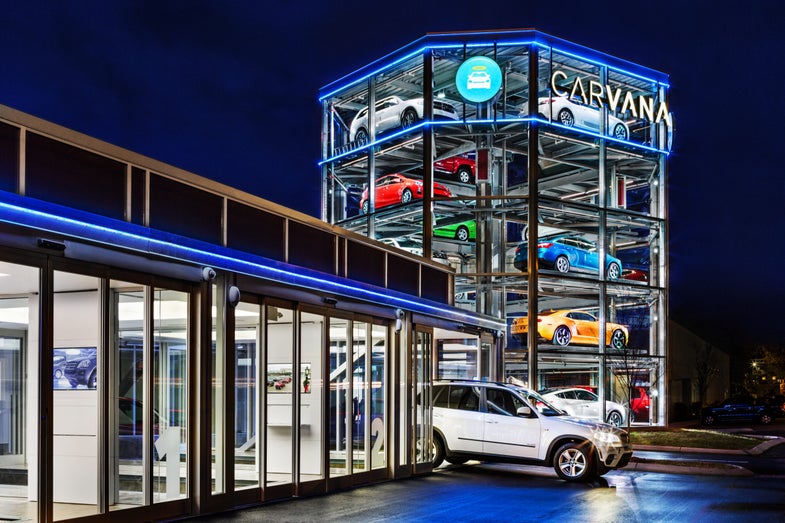 Carvana started as a way to buy cars online. Ernie Garcia, Carvana’s CEO, wanted to take the hassle out of haggling prices and signing paperwork. And he also hoped to shave a little off the cars’ prices as well. So, like any good entrepreneur, he looked toward the Internet and automation, which led to them creating a car vending machine. The facility opened on Thursday in Nashville, Tennessee.

Selling cars out of a giant robotic vending machine might sound like a fun gimmick, but doing something radically different from other dealerships, according to Garcia, makes a lot of economic sense.

“The lack of differentiation locked everyone into the exact same cost structure that forced them to attract customers with a low-priced car, and then put them in a back room and try to sell them thousands of dollars of things they don’t really need, in order to make up for their undifferentiated cost structure,” Garcia told Popular Science.

So, drawing up the paperwork, selling cars online, and delivering them via vending machine means Carvana doesn’t need to have a robustly staffed car lot with enough space for a test drive, and maintain a stock of various models–all of which add to the costs of running a dealership. Instead, Carvana’s vending machine holds 20 cars at a time, in a robotic tower. When the customer decides to make a purchase through Carvana’s website, they have the choice of picking up the car, or having it delivered. If the customer decides to pick the car up, the company sends the purchased car from the distribution center (they have one in Atlanta and one in Dallas) to the tower.

Upon arrival at the shiny glass facility, customers will type in their information on a tablet. They’ll receive a commemorative three-inch coin that they insert into the machine–to keep with the theme. Robotic platforms retrieve the purchased car, and automated parking technology delivers it to the customer.

Garcia says test drives are on the decline, but for customers who still like to try before they buy, Carvana has a seven-day trial period. You can drive it around, and if after a week, you’re not sold, you can return the car.

Right now, this is the only option for car vending machine enthusiasts in the U.S., but the company plans to expand to more cities in the future. For those abroad, Volkswagon’s car theme park Autostadt in Germany has a similar (though much larger) facility that delivers new cars to customers. And in China, a company called Kandi Technologies has been renting electric cars out of a vending machine-like facility.

You can watch a preview of Carvana’s vending machine below: