NASA Wants A Supersonic X-Plane Without The Boom

Seen and not heard 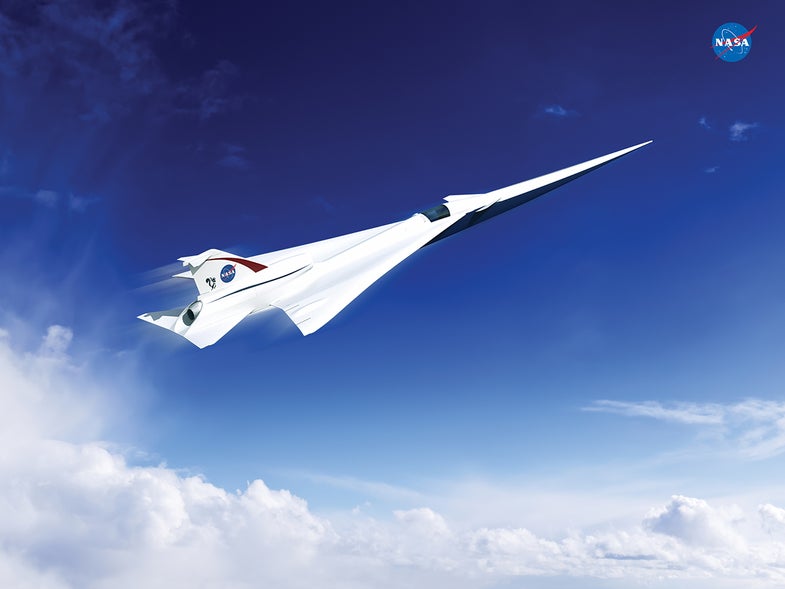 From NASA: "This is an artist's concept of a possible Low Boom Flight Demonstration Quiet Supersonic Transport (QueSST) X-plane design. The award of a preliminary design contract is the first step towards the possible return of supersonic passenger travel – but this time quieter and more affordable.". Lockheed Martin, via NASA
SHARE

Sound killed the supersonic airplane. While increasingly confined to memory, the British Aircraft Corporation’s Concorde was the first commercial jetliner to offer supersonic travel to time-crunched transatlantic travelers starting in 1976. It continued for decades before it was retired in 2003. Supersonic is not hard to do, strictly, but it’s very loud, so the Concorde found itself flying mostly over oceans, without people to disturb below. NASA recently restarted its x-plane program, and the first concept they’ve previewed is supersonic and quiet.

The concept is dubbed the “Low Boom Flight Demonstration Quiet Supersonic Transport” or “QueSST” (somehow). Today NASA announced that they’d awarded defense giant Lockheed Martin a $20 million contract for 17 months of preliminary development on the concept. The end goal of the project, according to NASA, is “A piloted test aircraft that can fly at supersonic speeds, creating a supersonic ‘heartbeat’–a soft thump rather than the disruptive boom currently associated with supersonic flight.”

If NASA can get companies to figure out quiet supersonic flight, it could, pardon the pun, create a new boom in air travel, as flight again gains the speed and convenience that distinguish it from other travel. If companies can match the roughly 1300 mph speed of the Concorde, quiet supersonic jetliners could make the trip between New York and Los Angeles in just a couple of hours. And military aircraft flying at supersonic speeds without the accompanying noise would be harder to detect.

NASA aims to have the flying part of the program start in 2020. If it’s successful, we might not even hear about it.