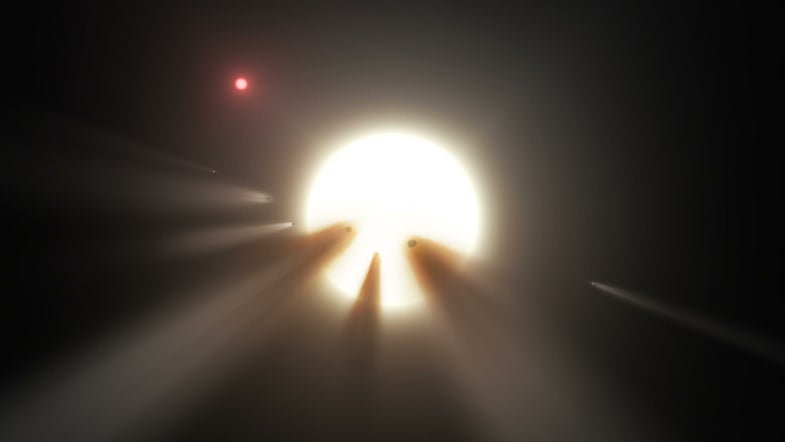 A star in a faraway solar system has caused quite a stir among astronomers. Its light fluctuates dramatically and in strange patterns, so scientists think something large and weird-shaped might be circling around it and occasionally blocking its light. It could be a family of cold comets, or pieces of busted-up planets and asteroids. One group has even suggested that it’s worth exploring the possibility of a huge alien structure, such as a swarm of solar collectors.

The star’s strange activity was originally discovered with the no-longer-functional Kepler telescope, but now scientists have followed up with observations from the Spitzer telescope. The results will be published in Astrophysical Journal Letters.

Although Spitzer can’t tell us much about whether there are aliens around the star KIC 8462852, it can help to sort through the other possibilities. A press release explains:

When Spitzer looked for that excess infrared light, it found none. This suggests that the planetary/asteroid collision hypothesis may be incorrect. But, there’s a caveat: Kepler observed the weird light patterns in 2011 and 2013, whereas Spitzer took these observations in 2015. If the objects circling the star have a very long orbit, they might not currently be in the right position where the Earth-trailing telescope would be able to observe their glow.

The Allen Telescope Array has also turned its dishes toward the mysterious star, to listen in for radio signals that could indicate whether there are aliens around the star. The ATA didn’t find evidence of aliens, but scientists are planning to listen again with a larger, more sensitive telescope next year.

Other telescopes will be observing the star as well, to try to shed light on this strange star behavior.