Look, it’s the Apollo 11 lunar module! And astronaut footprints left by Apollo 14! Well, you can make them out... 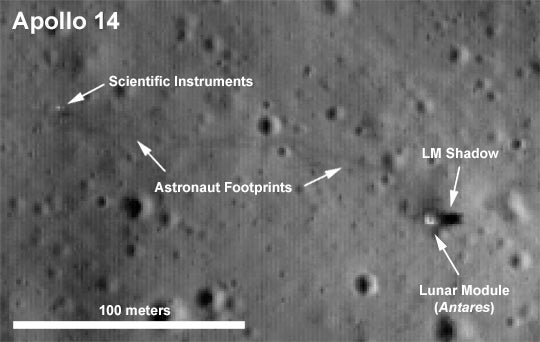 NASA’s Lunar Reconnaissance Orbiter snapped this image of the Apollo 14 landing site during its lunar tour.

Look, it’s the Apollo 11 lunar module! And astronaut footprints left by Apollo 14! Well, you can make them out if you squint. NASA’s Lunar Reconnaissance Orbiter (LRO) has been honing its camera-hound skills.

The lunar probe captured images from five of six Apollo sites between July 11 and 15, after first reaching lunar orbit on June 23. 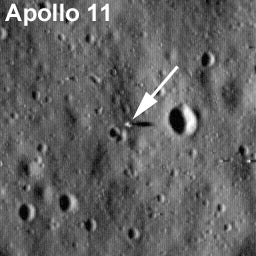 The Eagle has landed! Apollo 11’s lunar module can be seen (squint) in this image taken by NASA’s Lunar Reconnaissance Orbiter.

“The LROC team anxiously awaited each image,” said LROC principal investigator Mark Robinson of Arizona State University. “We were very interested in getting our first peek at the lunar module descent stages just for the thrill — and to see how well the cameras had come into focus.”

Each image has a resolution of roughly four feet per pixel, with the Apollo relics filling an area of about nine pixels. The long shadows from each Apollo lunar module stretch to almost 20 pixels.

This comes as part of NASA’s celebration of 40 years since man first stepped on the moon during the Apollo 11 mission. We recently dug up 10 things you probably didn’t know about that momentous occasion.

However, the real fireworks will take place in October, when LRO launches its probe on a one-way trajectory to crash into the moon.