Herschel, the largest infrared space telescope yet flown, was launched a month ago by the ESA and was not expected to deliver images for another few weeks. It has, however, already produced images- in three colors- of M51, ‘the whirlpool galaxy,’ from a test observation run. The goal of the test was to get a large image and a sense of what Herschel will deliver in the future. 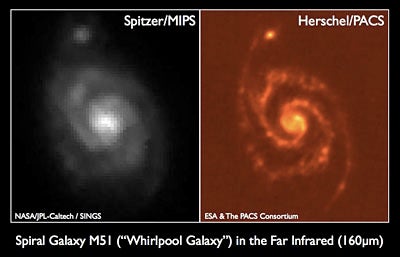 Figure B: Spitzer Vs. Herschel

The images were taken at 70, 100, and 160 microns by Herschel’s Photoconductor Array Camera and Spectrometer (PACS), just after Herschel’s cryocover was opened last Sunday, June 14. The Herschel images shown here are composites of those three images.
Herschel’s superiority is clear in comparing these test images with what was previously the best image of M51, taken by NASA’s Spitzer Space Telescope. In figure B, Herschel’s images depict the galaxy at a higher resolution, a benefit of the telescope’s larger size. As stated in the ESA release, “Herschel reveals structures that cannot be discerned in the Spitzer image.”