Bytes in the Air 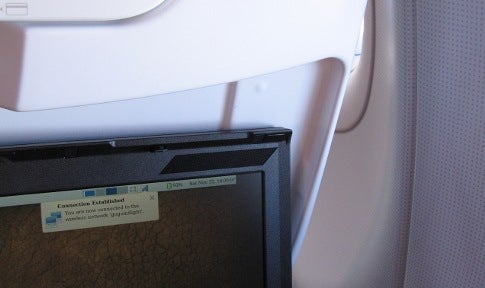 As I post this, I am thousands of feet above San Francisco, on a Virgin airplane, surrounded by press and partygoers celebrating Virgin’s imminent roll-out of wireless internet to their passengers.

The in-flight service is provided by a carrier called Aircell, which spectrum geeks may recall won an exclusive ten-year contract from the FCC in 2006 to provide air-to-ground broadband at 3MHz. Onboard, a standard 802.11 wi-fi network works with all standard devices.

Aircell’s service, called Gogo, has already been rolled out on American Airlines, and seems likely to become a for-pay feature on a majority of airlines. It uses a trio of antennas mounted on the outside of the plane to send an EV-DO signal to the ground, where it is handled by a dedicated network of 92 cell towers, distributed throughout the U.S. Everyone on the plane shares 3.1 Mbps of bandwidth, which suffices for most low-impact purposes.

Email, web, IM, PPX, all your favorite Internet applications are available; all but one. Use of the service for Voice over IP applications like Skype is blocked with a proprietary technology, in part because they would monopolize the shared bandwidth, and in part, according to Aircell spokesman Joseph Gavin, as “a reaction to widespread passenger aversion to the idea of many people talking loudly on flights.”

American Airlines charges a fee of $12.95 per person. Virgin will offer the service for free during a beta period that starts Monday, then for a price that is yet to be determined.

In theory, it’s a bit of a novelty. Out the window, the foggy Bay Area; on my screen, the latest science news and an email from my catsitter (everything’s fine). In practice, my wireless connection keeps dropping, and the speed varies from decent to painful.

I can imagine getting some work done on a plane, if the connection were solid. I might even choose a wireless-enabled airline over another in the future, if I had a deadline to meet. (Conversely, I can see myself opting sometimes for a nice Internet-free flight. Connectivity-free zones are becoming harder and harder to find.)

Now if only they provided power outlets.

Edited to add: Virgin’s rep wrote me today to say “I wanted to let you know (and we should have pointed it out to you on the flight!), but we actually do have standard power outlets at every seat (underneath the seat).”