Use the force, Huawei 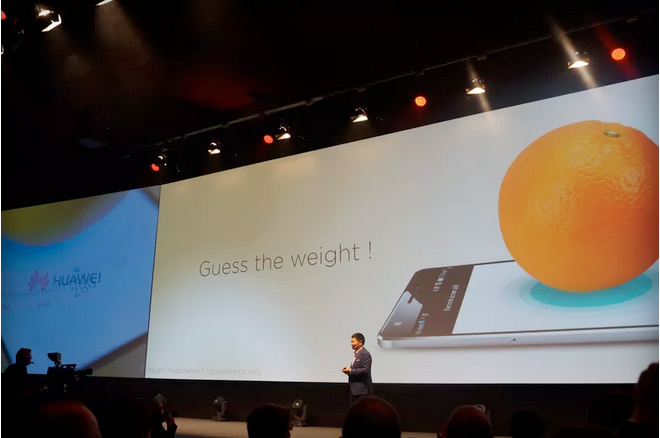 The Huawei Mate S phone has been announced at IFA 2015, Europe’s biggest tech show. Along with better specs and a sleeker design, Huawei says it’s adding Force Touch to its phones–a full week before Apple will announce the iPhone 6s and 6s Plus likely containing the same feature.

Apple unveiled Force Touch alongside the Apple Watch last September as a way to use different pressures to reveal hidden controls throughout the wearable’s interface. We’ve seen Cupertino’s version of Force Touch offering access to contextual menus and more granular playback controls. But Huawei throws in an added feature that’s a more novel use of the pressure-sensitive technology. The Mate S will allow your device to act as a scale to weigh light objects, though the company doesn’t mention the maximum weight that can be used with the phone.

During their IFA press conference in Berlin on Wednesday, the Chinese phone manufacturer unveiled its inclusion of Force Touch by weighing an orange using the device. (Naturally, the company chose not to weigh an apple…)

The Huawei Mate S brings along many improvements from last year’s flagship device. The new headset comes with 3GB of RAM and storage space of 32GB and up. The camera of Mate S camera will weigh in at 13 megapixels on the rear and 8 megapixels towards the front. Huawei has included a 2,700 mAh non-removable battery. Prices for the Mate S will start at €649 ($730 USD).

The Huawei Mate S will bring an impressive array of specs to the phone-maker’s lineup, but the inclusion of Force Touch enables offers better competition against Apple’s coming iPhone 6s. The widely accepted rumor is that Apple will bring the feature first introduced in their Apple Watch, then later added to the Macbook, to the coming iOS 9 device.

The ability to weigh objects is a more creative use for Force Touch than the standard use of summoning contextual menus—as it’s used on the Apple Watch. But more importantly, it will allow third-party iOS apps that make use of the iPhone 6s pressure sensitivity to make their way to the Mate S. The option may not be enough to sway iPhone buyers to Android. But all of Samsung’s latest flagships are missing the “Force Touch” bullet point on the back of their box, and users are sure to take note.