The newest Roku addresses all of our issues with the last model--more powerful, better interface--with some unexpected bonuses to boot. 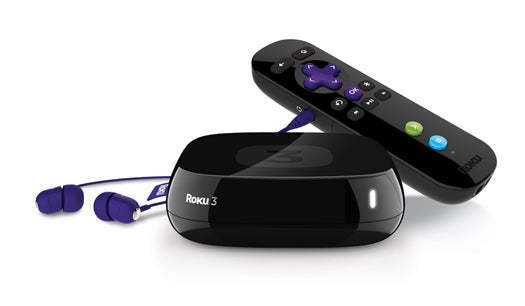 Roku just announced the company’s newest flagship media player, the Roku 3. Roku is one of our favorite, most indispensable little gadgets–a hockey-puck-sized gadget that plugs into your TV and gives you great, easy access to Netflix, Hulu Plus, Amazon Instant Video, Spotify, Rdio, HBO Go, MLB TV, Flickr, Plex, and a few hundred other apps. It’s by far the easiest and most fool-proof way to get streaming content on your TV.

The newest version addresses a few of the issues we had with the device. Compared to a Boxee Box or Apple TV, Roku has always been underpowered and its interface has always taken simplicity to an extreme–sometimes it’s not very efficient, and it’s not the most attractive interface out there. The new box comes with an improved processor, which should help it deal with more intense tasks like beaming high-def content from a computer, and a new interface, which looks a bit more grid-like and certainly prettier than before.

The remote also gets an upgrade; the Roku 3, like the Roku 2 XS before it, will come with a motion-sensing controller sort of like the Nintendo Wii’s, which is used for (very awkward) rounds of Angry Birds. But the new remote also has volume controls (which is welcome for folks who rely heavily on the Roku) and, in a very cool little touch, a headphone jack, so you can listen in bed without having to string a headphone cable all the way from your TV or stereo. It’ll retain the HDMI, Ethernet, USB, and microSD slot, though it seems to do away with the old Roku’s A/V-out jack.

The Roku 3 will sell for $100, starting this April. But the older Roku 2 models, which are significantly cheaper (the very competent Roku LT costs only $50), will get the new interface as well, so no need for older owners to feel neglected.