When Atari’s Pong first came out, Popular Science had a succinct opinion: Playing a game on a video screen was “one of those novelties that everyone will shortly get tired of.” We’ve never been so glad to be wrong.

As videogame designers rush forward in their perpetual quest to revolutionize the gaming experience, perhaps the most astounding achievement is just how far we’ve come in one lifetime.

Modern videogames are nearly unrecognizable from their early days of simple flashing lights and monotonous beeping. Here are 10 electronic games from America’s not-too-distant past, including Pong, Nintendo’s short-lived Virtual Boy and the awkward beginnings of online multiplayer. Whether the goal is paddling a tiny ball across the screen or defending a fictional world from a dragon god, gamers throughout time have one thing in common: They can never get enough playtime. 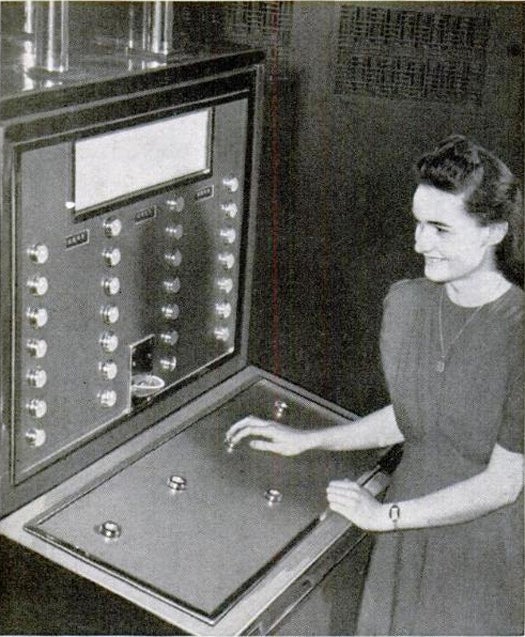 This “one-ton electric brain” challenges players to the ancient Chinese game of “nim.” After a user turns off a chosen number of lights from the first row, the machine turns out its own choice of lamps. The player to extinguish the last light wins. According to the article, the only way to beat the game is to call upon the “powers of two of the binary system of numbers.” If defeated, the machine offers up a pocket token as a reward to the clever victor. Read the full story in Playful Machine Is Hard to Beat at Own Game. 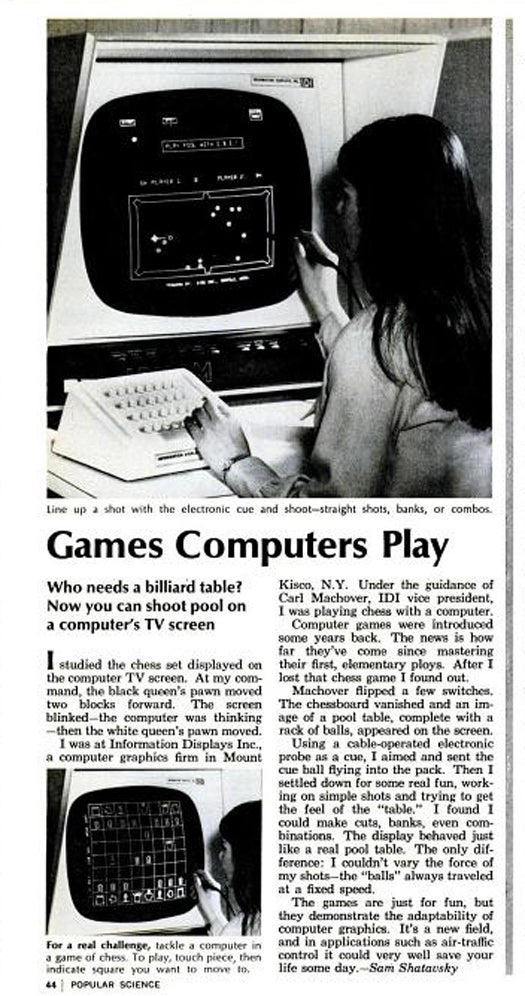 In 1970, the most advanced games could be played right on a “computer’s TV screen.” Author Sam Shatavsky visited computer graphics firm Information Displays to try out the latest technology, including touch-screen billiards and chess. “I was playing chess with a computer,” he writes breathlessly. In fact, the field of computer graphics was advancing enough that – just maybe – it could soon be used in applications like air-traffic control, he says. Read the full story in Games Computers Play. 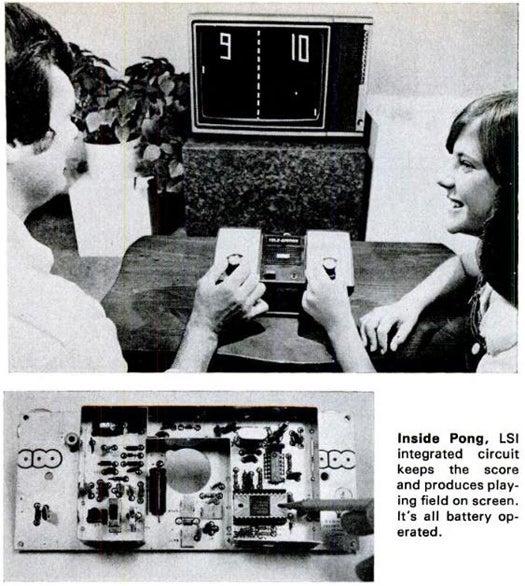 Compared with the revolution it would spark, Pong’s first appearance in Popular Science was somewhat lackluster. William Hawkins (who would go on to write many, many articles about video games for PopSci) says the sounds are a “fun gimmick” for both children and adults. The $99.95 game even keeps the score right on the screen. In an eerie foreshadowing of generations of screen-addicted gamers, Hawkins writes: “If you think this is one of those novelties that everyone will shortly get tired of, you may be right. But I’ve been challenging visitors to TV tennis for a month now and haven’t worked up an apathy – or a sweat – yet.” Read the full story in “Pong” – It’s TV Tennis. 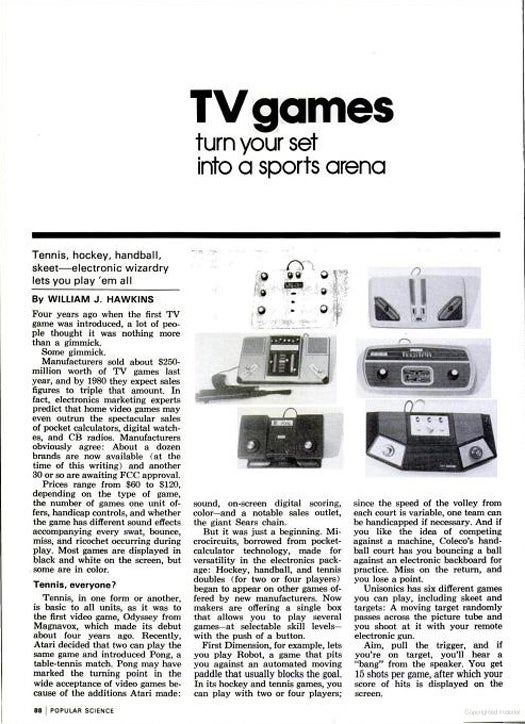 Just eight months after its first, lukewarm mention of Pong, PopSci got the memo that video games were more than a gimmick. With Americans fully under the spell of “electronic wizardry,” the TV game industry was raking in millions. Experts predicted sales could soon exceed those of pocket calculators, digital watches and CB radios. Imagine! TV hockey, handball, catch and skeet shooting joined Pong has living room staples by 1976. But why limit all this technology to the realm of fun? Videocart, a “solid-state memory device,” could perhaps store teaching aids, recipes or lists of phone numbers. “The future possibilities are much greater than just a game of chance.” Much greater, indeed… Read the full story in TV Games Turn Your Set Into a Sports Arena. 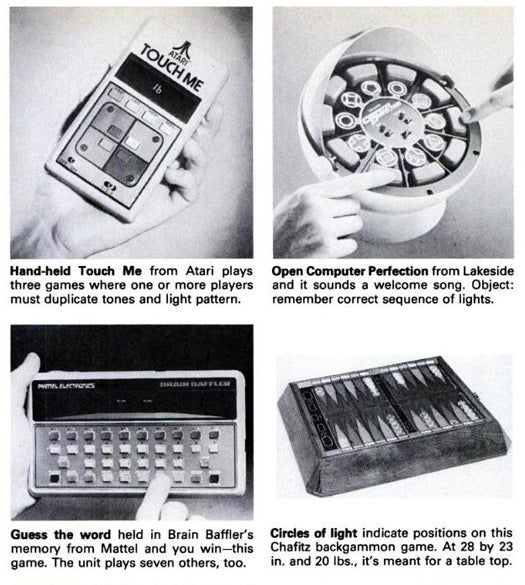 Only three years ago they were a passing novelty. Now, electronic games “may be smarter than you are.” In his latest installment, gaming enthusiast William Hawkins writes that microprocessors are fast changing the entertainment landscape. “Some of these games,” including Voice Chess Challenger and Sears Follow Me, “border on humiliating.” One wrong move, and an “electronically synthesized voice” will call out your folly. Milton Bradley’s Microvision is like a primitive Nintendo Game Boy with its two-inch screen and variety of plug-in games. Others, like Mr. Challenger from Texas Instruments, teach children pre-Internet skills like spelling. Read the full story in Electronic Teasers. 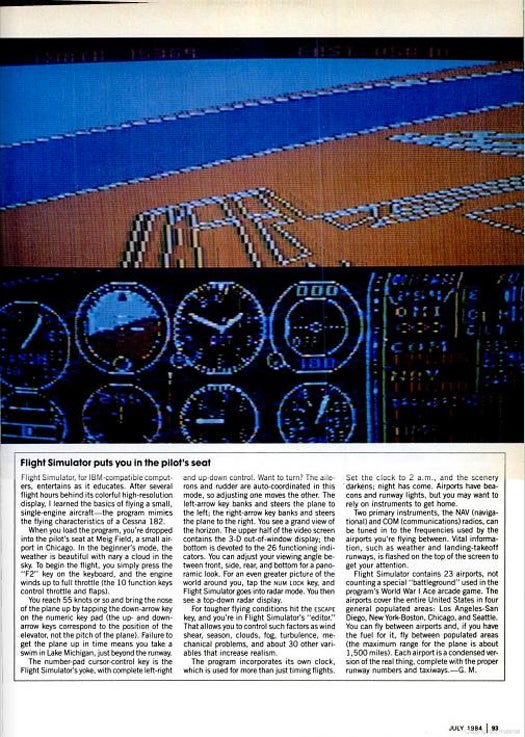 “Before me, on my IBM PC, is the Microsoft Flight Simulator, an amazingly realistic program that duplicates actual flying conditions.” By 1984, adults were enjoying classics like Flight Simulator and Temple of Apshai on home computers. Text-based fantasy and role-playing games delighted geeks everywhere, while Roklan’s Lifespan, a “sociological simulation,” let players create characters that grow up, get jobs and make friends. Read the full story in Playing the New Adult-Rated Computer Games. 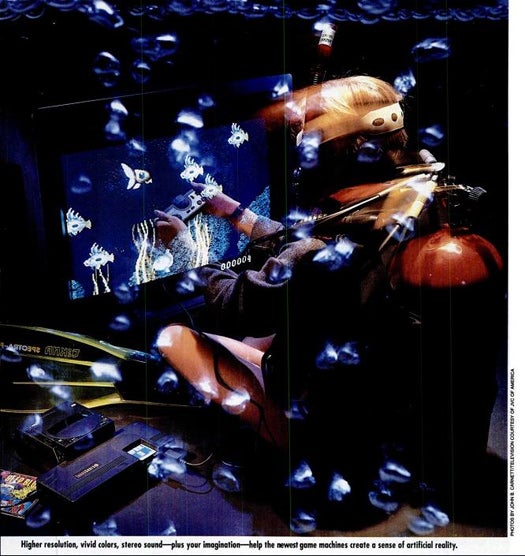 Oh, the magic of 16 bit. In “Video Games Aim at Reality,” Robin Nelson writes that 16-bit games “are a new generation of hair-raising, adrenalin-pumping realism.” Sega, NEC and Atari were wowing U.S. players with colorful, smoother animation, while children in Japan skipped school in droves to play Nintendo’s Super Famicon. The end of the article mentions a growing public health concern: “the potential for obsessive game playing.” After a week of playing Atari’s Lynx handheld system, Nelson says he suffered a lingering numb-thumb condition. “Clearly, games can be abused.” Read the full story in Video Games Aim at Reality. 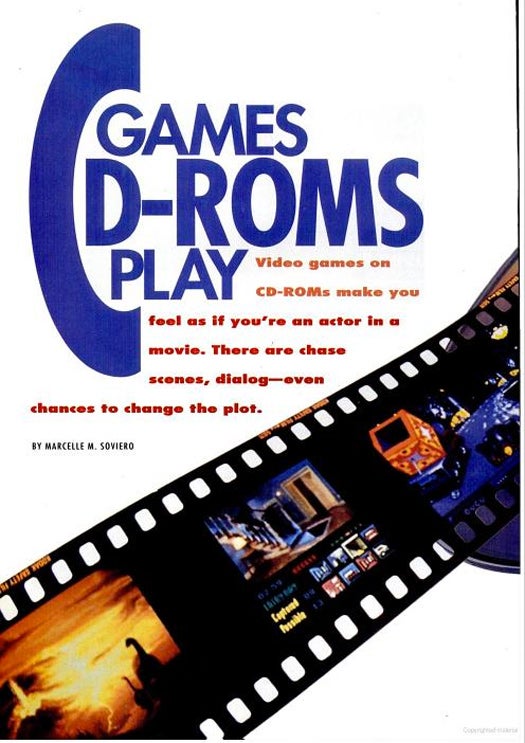 By 1992, the most cinematic games were on CD-ROMs. The characters and scenes are so realistic, “it’s as if the actors in a movie turned to the cameras and spoke directly to you, in your living room.” CD-ROMs stored 500 times more data than conventional cartridges and featured CD-quality audio. Industry experts predicted that “video-game soundtracks… will be sold someday soon in music stores as they are in Japan.” Read the full story in Games CD-ROMs Play. Nintendo’s 32-bit Virtual Boy was sadly discontinued after less than a year on the market – the world wasn’t ready for true 3-D gaming. Place the battery-powered device on a tabletop and press your face into the mask to block out external light. The red-on-black LED graphics seem to move toward you as you play Mario’s Tennis or Nester’s Funky Bowling. Link two Virtual Boys to play against a friend. Then go lie down, because you probably have vertigo. Read the full story in Seeing Red on Nintendo. 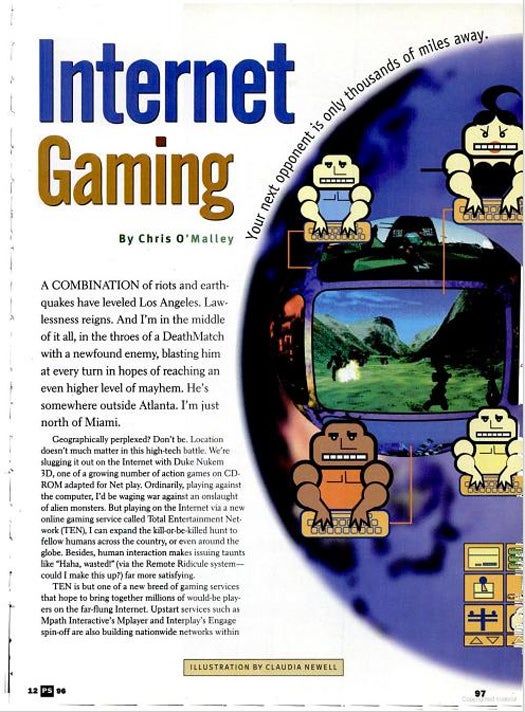 “Your next opponent is only thousands of miles away” with the new online gaming service called Total Entertainment Network. The service hoped to bring together millions of gamers on the “far-flung Internet.” But it will cost you. TEN charged $9.95 per month for five hours of play time; true gamers would of course spring for the $29.95 per month unlimited package. Because how can you limit yourself with options like Duke Nukem 3D and Doom? Fast-paced shooting games were hard to keep running smoothly, though. After all, everyone knows “the Internet was designed to be a dependable tortoise, not a speedy hare.” Read the full story in Internet Gaming.
Popsci Archive