Microsoft’s Research department is always coming up with cool new ways to interact with gadgets, and this newly released video... 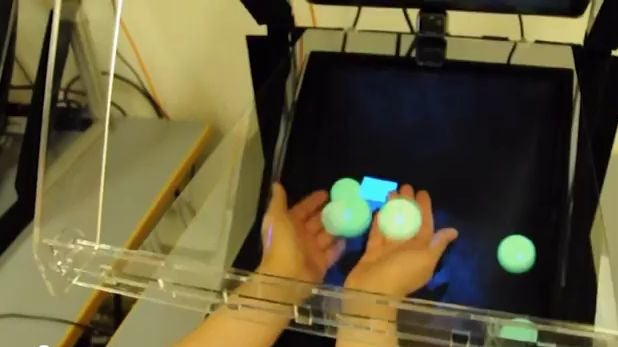 Microsoft’s Research department is always coming up with cool new ways to interact with gadgets, and this newly released video of the “Holodesk” is definitely one of the cooler ones. It uses a Kinect (“hacked” doesn’t seem really correct when it’s a Microsoft project) to see your hands and face, and allows you to juggle completely virtual 3-D objects–balance a virtual ball on a book, then tip it into a bowl of water, or stack virtual 3-D blocks. It’s pretty amazing.

You can see in the video above what’s happening: the user is able to interact with virtual 3-D holographs just as if they were real. They’re slightly janky, but behave mostly as they would in real life, responding to gravity and force and other objects.

The system got a major shot in the arm thanks to the Kinect. As it turns out, interacting with virtual objects is just as much about tracking your line of sight as about tracking your hands. Its accuracy is much more on-point thanks to our little $150 buddy, though you still have to look through the screen or glass plate to see the virtual objects.

A product of the Sensors and Devices Group at Microsoft Research, the Holodesk isn’t due for release or anything like that–but given its main sensor is a Kinect, we can see some pretty impressive similar projects popping up in the near future.