Hands On With the BlackBerry PlayBook: A Seriously Impressive Multitasker

After using BlackBerry's dual-core wonder, my mind was more than a little blown 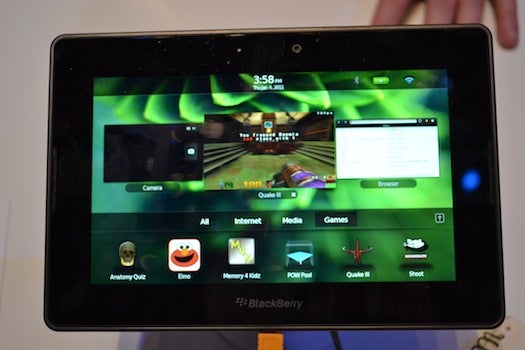 BlackBerry’s PlayBook tablet was announce way back in September, but this is the first time the press has been able to get their sweaty fingers all over it. I played with the 7-incher at BlackBerry’s booth here at CES, and came away not just impressed, but amazed: This is a legitimate competitor to the iPad and Motorola Xoom, and deserves a serious look from everyone, not just BlackBerry’s core corporate audience.

The PlayBook is a 7-inch tablet, the same size as Samsung’s mediocre Galaxy Tab, but it doesn’t feel nearly as awkward. That’s because it’s running a brand-new OS, while the Galaxy Tab uses the same Android 2.2 that’s on much smaller phones. The Galaxy Tab feels like a slightly larger Android phone, but the PlayBook feels like a tablet. The OS is largely to thank for that.

The PlayBook runs BlackBerry’s brand-new “Tablet OS,” which is much more similar to Palm’s excellent and underrated WebOS than to the staid BlackBerry OS that’s been largely unchanged in BlackBerry phones for years. The homescreen is taken up largely by big thumbnails of open apps, which are presented in real-time. That means if you’re watching a video in one app, playing a game in another, and reading a Flash-animated website in another, all three will be shown in a moving, buttery-smooth thumbnail, not just a static image. That’s possible due to the PlayBook’s dual-core processor and generous 1GB of memory–the iPad, with half the processing power and a quarter of the memory, might well burst into flames if it tried to handle a similar task. 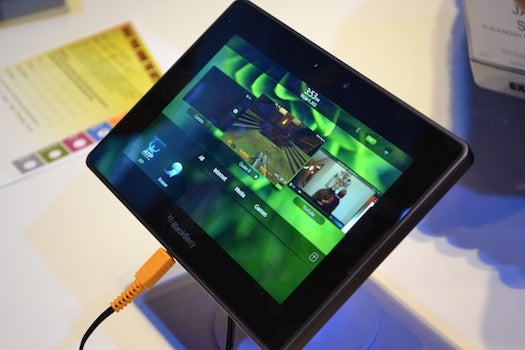 You swipe through the open apps, and tap to make one full screen or swipe it upwards to close it. It’s not a new idea–WebOS created it, and Nokia was one of the first to realize its brilliance–but a lack of originality is just fine with me when it’s such a damn good idea.

Like WebOS, the PlayBook uses the bezel surrounding the screen as a touch area. To bring up the keyboard, you swipe from the bottom left corner, and to bring up the homescreen, you swipe up from the bottom bezel. It’s a totally natural way to control the tablet, and doesn’t require any extra buttons on the gadget’s face. The screen itself is super clear, with even tiny text appearing legibly.

Browsing the Internet was super smooth, including all of the typical tablet-y motions–swiping around pages, pinching to zoom, that kind of thing. That’s more impressive because the PlayBook supports full Adobe Flash. Every video I tried played perfectly within the page, and the PlayBook didn’t seem to suffer any adverse consequences from the notoriously processor-heavy task of embedded Flash.

The PlayBook also has a 3-megapixel front-facing camera for video chat, which seemed to work as expected–it’s way less blurry or pixelly than a 1.3-megapixel smartphone camera, but not exactly high-def, either. 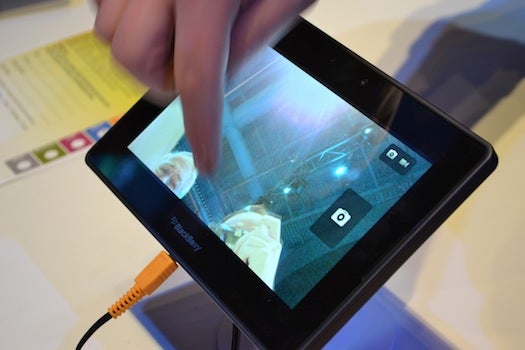 The only real downside is kind of a bizarre one: To use the messaging apps (in this case, email, calendar, and BlackBerry Messenger), you have to tether a BlackBerry. You can access that stuff from the browser, but the decision to force tethering for basic tasks like communication seems like a marketing decision that doesn’t make sense in the real world. (“Guys, it’s a media consumption device! Let’s leave messaging to the BlackBerry!” Groan.)

So here’s the rub: The PlayBook is a surprisingly formidable tablet from a company largely written off as boring by gadget nerds. I frankly loved it–the sheer power, the perfect smoothness of the UI, the level of polish overall–calling it an iPad competitor isn’t wishful thinking at all. But RIM (the makers of BlackBerry) really need to get their act together on apps. BlackBerry smartphones are basically a disaster zone for apps, with the cobbled-together App World both small and unwieldy. That won’t fly for a tablet as good as this one. BlackBerry seems fully aware of this; the reps wouldn’t leak me any specifics, but said they’re “in talks” with several “major developers,” so hopefully there’ll be an app selection worthy of the tablet itself.

RIM says the tablet will launch sometime early this year, for a price that is as yet undisclosed (but “competitive with other similar devices,” which is marketing speak for “around $500”).