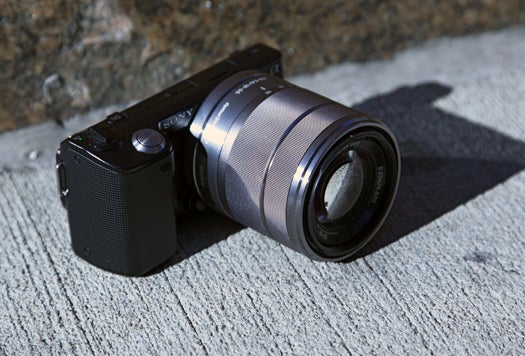 Earlier this year, I bought my first DSLR, and took it (and its gigantic lens) everywhere. My vacation photos and day-to-day snaps never looked better. But I couldn’t say the same for my left (A.K.A. my bag-carrying) shoulder. So slowly, day by day, I stopped lugging my camera around with me. Then along came Sony’s NEX-5.

This fall, I started carrying the NEX-5, the smallest lens-changing camera on the market, and I was snap-happy all over again. I’d used other compact, interchangeable-lens systems, such as the Olympus EP-series, before, even toting Panasonic’s Lumix GF1 as my primary camera at this year’s Consumer Electronics Show. Even so, I became addicted to the NEX-5 like no other.

Even though its body is no thicker than my old point-and-shoot, its images matched any of my best DSLR shots. The magic is in the versatility. The 18-55mm kit lens was able to handle nearly every shot (from close-ups to wider-angle landscapes), and full manual control (aperture, exposure, and shutter speed) allowed me to make every shot look exactly how I wanted. I was able to brighten and freeze a shadow-y waterfall, or sharpen a person in the foreground while blurring the back. And, unlike many other cameras in the category, this puppy is one fast focuser, so I was never left with that sinking I-missed-the-shot feeling; quick start-up helps avoid that woe, too.

Compact lens-changers from their inception over a year ago have promised DSLR quality images in point-and-shoot packages — the best of both worlds. Until I tossed the NEX-5 into a small side pocket in my bag, though, I wasn’t really a believer. Now I am.