The Evo is first 4G phone, with a dream list of specs--can it live up to expectations? 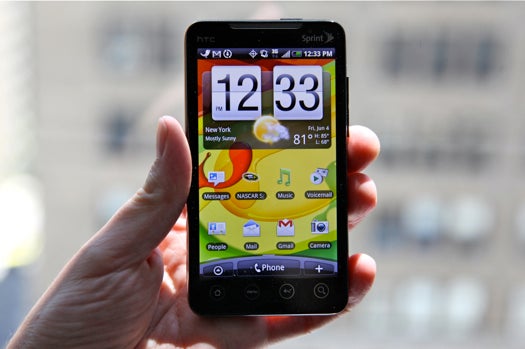 The phone of the hour (well, at least until Apple unveils the next iPhone on Monday) is Sprint’s HTC Evo 4G, and it goes on sale today. We’ve been using a review unit for the past week, and here are our impressions.

The Evo is the first phone to fully support WiMax, the faster next-gen network standard (“4G”). There have been WiMax phones before, but they were handicapped by their inability to downgrade to 3G when the faster next-gen network wasn’t available. The HTC Evo 4G is the first handset to do both, which is good news for heavy mobile-Web browsers who want the extra boost of 4G speed, but don’t want all that power zapping their battery life all the time. The 3G downgrade is also nice if you, say, want to make a phone call on your phone — shocking, I know.

Sprint’s 4G network is the crowning glory of the Evo, allowing it to stream live 720p video without a blip; sadly, though, NYC’s 4G network is still pending. But it’s not all talk: When we first toyed with the Evo in March in Las Vegas, it was on 4G; and it flew. Aside from that, it’s a gorgeous piece of hardware: its humongous 4.3-inch OLED screen is the sharpest I’ve seen on a handset, which is good considering it needs to do justice to its eight-megapixel camera and all the HD videos you’re sure to watch. 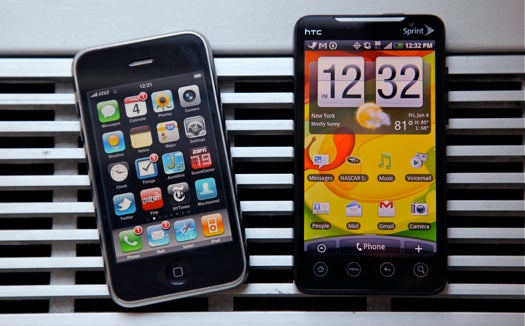 It’s a big one

Ever since the T-Mobile G1, Android phone owners have never been able to leave their chargers at home, so it’s not in the least bit surprising that that Evo (with its massive, bright screen) can scarcely make it through the daylight hours on a single charge; unless, of course, you don’t mind cutting Android off at the knees, disabling auto-updating on your homescreen widgets, email syncing and the like. A bad deal, indeed. And, considering how heavy the phone is (it weighs nearly as much as a fully dressed quarter-pounder with cheese), it’d be nice if a little of that heft was used on a larger battery instead of giving up valuable real estate for a novel little kickstand that you’ll probably only use a half-dozen times. 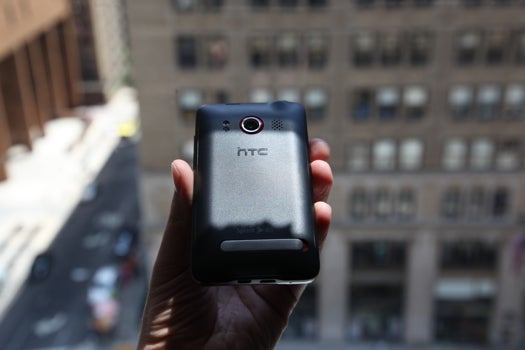 The Evo 4G is a giant of a phone, which is both a blessing and a curse. The large screen makes typing on its virtual keyboard more comfortable than smaller Android handsets like the Nexus One, but damn is it heavy. For all we love about its design and guts (it packs a 1GHz Snapdragon processor), all that zip is what ultimately becomes its downfall. All told, it’s a phone for media addicts who are willing to sacrifice a pocketable cellphone for a gorgeous slab (and its charging cable).