Robots Made Out of Cell Phones Dance, Cry, Throw Tantrums, and Talk to Each Other 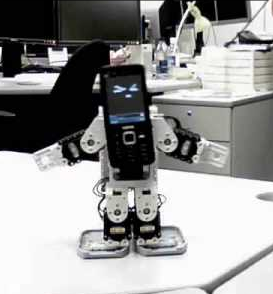 Canadian researchers trying to integrate robots into our lives have come up with a pair of dancing, crying cell phone ‘bots. The robots, called Callo and Cally, are cell phones with limbs.

Cally stands about 7 inches high and walks, dances and mimics human behavior. Callo stands about 9 inches tall, and his face, which is a cell phone display screen, shows human facial expressions when he receives text-messaged emotions. When he receives a smile emoticon, Callo stands on one leg, waves his arms and smiles. If he receives a frown, his shoulders slump and he will cry. If he gets an urgent message, or a really sad one, he’ll wave his arms frantically.

Ji-Dong Yim, a PhD student in interactive arts and technology at Simon Fraser University in Vancouver, says it’s basically a simple avatar system. The robots can communicate with each other, for instance when their masters are on a video call.

“When you move your robot, my robot will move the same, and vice versa, so that we can share emotional feelings using ‘physically smart’ robot phones,” he says in an SFU release.

The robots, which are made from Nokia N82 phone parts and components from a Bioloid robot kit, can detect human faces using OpenCV software. Cally can even track users’ facial expressions during a phone call.

The robots can also be preprogrammed to move in certain ways when receiving calls from specific phone numbers.

The same concepts could be used to make other helper robots communicate with people and build long-term intimacy with them, researchers say.