Google Decides Not to Change the Mobile Game With Nexus One

Google’s own Android phone, the Nexus One, looks like an excellent phone–bettering in some ways Motorla’s Droid, previously king at... 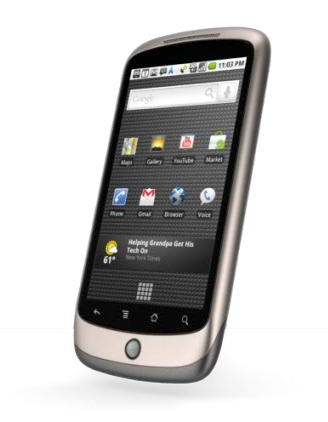 Google’s own Android phone, the Nexus One, looks like an excellent phone–bettering in some ways Motorla’s Droid, previously king at the top of the Android heap and one of only a few smartphones able to competently challenge Apple’s iPhone. But in unveiling it today in California, Google did not pair it with an ad-subsidized price break that many were anticipating.

It’s not shocking news–gadgets sites caught wind a few weeks ago of Google’s plans to sell the Nexus One in the traditional manner, bundled with a 2-year T-Mobile contract at a subsidized price ($180) and unlocked at full price ($530). Many saw Google’s direct involvement with the design of the software and hardware of the phone (working with HTC) as an opportunity to offer an Android phone at a significantly reduced cost (maybe even free) in exchange for all the benefits of more people using Android to surf the mobile web and potentially click on some new specialized mobile ad placements. It fits with Google’s general ethos that more people using their services on the web = good, but alas, not this time.

That’s not to say the Nexus One doesn’t look great. Google is unveiling Android version 2.1 with the phone, so far the only one to have it (Verizon’s Droid runs 2.0). The 2.1 version beefs up photo galleries (which now sync with Google’s Picasa service), adds interactive wallpapers that can display information in widget-like boxes on your phone’s home screen and integrates voice control throughout the phone in any text field, not just search.

Add to that a brand new Qualcomm Snapdragon processor at 1GHz (fast) and an impressive 3.7-inch 800 x 480 AMOLED screen and you’ve got a pretty impressive package. If only it didn’t come with a two-year T-Mobile ball and chain. If Verizon is your burden of choice, you’ll have the opportunity to get a CDMA version of the Nexus One later this year.

You can buy the Nexus One directly from Google in their new online store, which will soon be home to more Android-powered phones.