We’ve talked about Android 2.0 and (virtually) walked through the new Google Maps. Now, it’s for real, and it’s here....

We’ve talked about Android 2.0 and (virtually) walked through the new Google Maps. Now, it’s for real, and it’s here. Motorola’s Droid has landed at PopSci HQ, and it’s making good on its promises.

Though it’s touted as the thinnest landscape slider cell phone (a little more than a half-inch), don’t be fooled into thinking the Droid is light; at nearly 6 ounces it outweighs most BlackBerries and the iPhone — but at least it feels sturdy. Its 3.7-inch display is responsive and beautifully high-res (480-by-854 pixels), and there’s nice haptic feedback when you press, well, anything (I’m already finding myself defaulting to the virtual keyboard in landscape mode over sliding out the physical QWERTY).

So…this whole Android 2.0 thing: it’s got some nifty tricks up its sleeve. The universal search pings everything on the handset and the Web from anywhere you navigate; if, for example, I’m listening to The Roots, I can search from their artist page in the media player and get hit back with everything local, plus extra goodies like YouTube videos (which render quickly and smoothly, by the way). As for the contacts integration, pulling all the myriad ways you have to ping one person (text, Facebook, e-mail, or gasp phone call) into one spot saves the trouble of clicking back and forth between apps and windows.

Speaking of windows, if a new e-mail or text message pops up, you don’t have to abandon your current task (be it Web browsing or YouTube watching); you can pull up the Droid’s Notification menu, see what’s up, and hop back where you started. The Web browser is similarly smart, keeping tabs on multiple windows at a time and creating a thumbnail view of your bookmarks.

And, as we said earlier today, Google Navigation Maps ain’t foolin’ around. Though it couldn’t do much to follow me around the corridors at PopSci, I was able to track the route to the beloved burgers of Shake Shack with turn-by-turn with street view, satellite view, and a traffic layer on top. I also to added a layer for gas stations along the route in two clicks. Oh, and I entered the destination by voice.

The Motorola Droid will be available to Verizon customers on Friday, November 6 for $200 with a two-year contract. 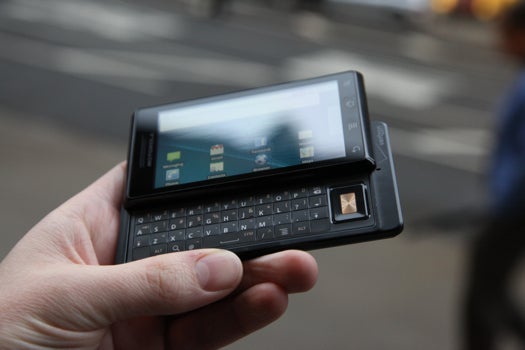 Every input method is covered, with a haptic capacitive touchscreen, physical QWERTY keyboard and a 5-way directional pad that almost looks like some kind of fingerprint sensor. 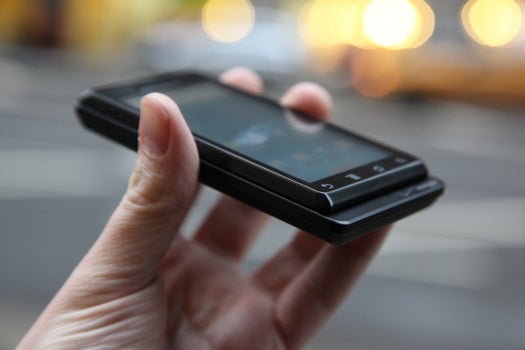 With the keyboard tucked in, the profile is pretty slim. 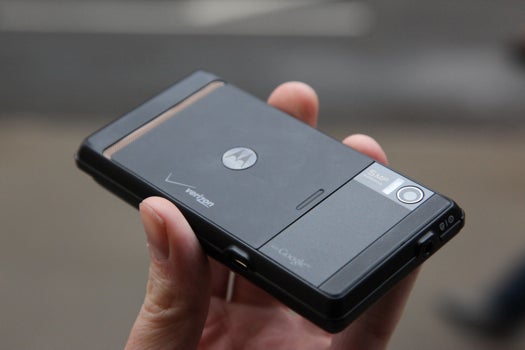 On the back is the 5-megapixel camera. 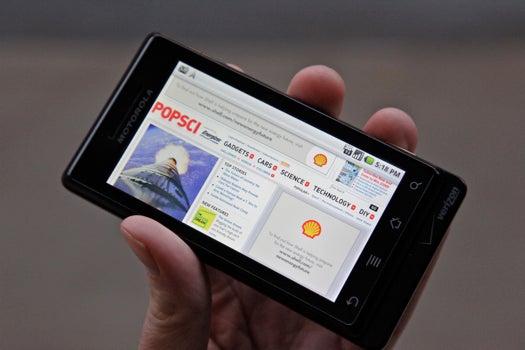 The browser (and everything else, really) looks exceptionally good on the ultra-crisp high-res screen. 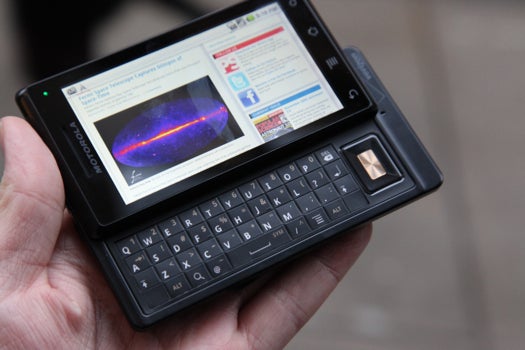 The keyboard flips out with less of a pleasing snap than most phones, but it’s solid.
Corinne Iozzio