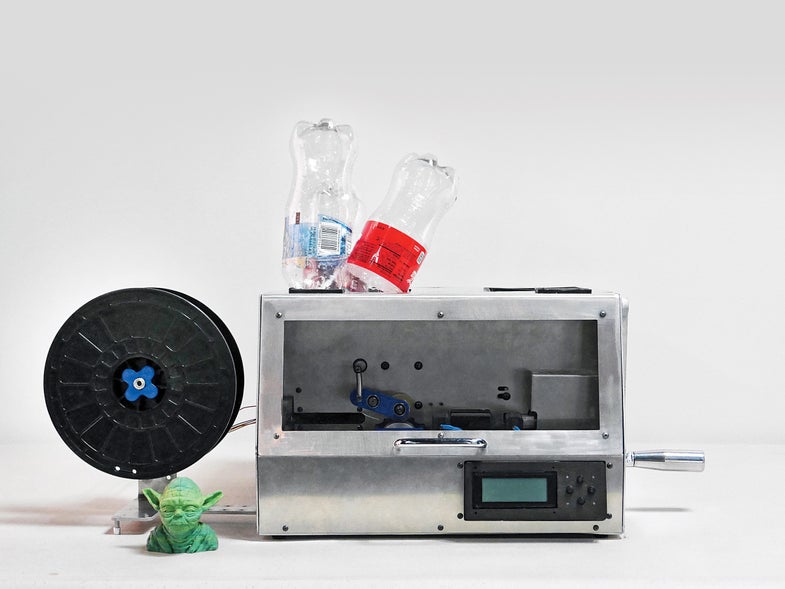 If you want to 3D-print all of your ideas, you’ll need to start with a hefty supply of plastic filament—the “ink” used by 3D printers. Or you could get a ProtoCycler and make your own.

In 2013, Dennon Oosterman and his former classmates Alex Kay and David Joyce grew tired of churning through expensive filament. So they built a machine that could recycle it back into usable form. The $700 ProtoCycler grinds scrap plastic—such as empty bottles and rejected 3D-printed models—into digestible pieces, melts it down, extrudes it, and winds it onto a spool. To ensure consistency, a computer-controlled diameter-feedback system uses two cameras to accurately measure the width of the filament.

There are a few drawbacks to recycled plastic. Although the Proto­Cycler’s filament starts out with about the same strength as the standard stuff, it gets weaker with each reuse. Reprinting your model too many times might make it brittle and frail. Multicolored plastic also blends like paint. This isn’t a problem at first, but eventually your filament will end up brown. None of that is a big deal if you’re using the printer to rapidly prototype designs, when quantity matters more than quality. “Anyone can 3D-print something over and over again until they get it perfect,” Oosterman says.

This article was originally published in the January/February 2016 issue of Popular Science, under the title “Feed Your 3-D Printer Recycled Plastic.”