How did it know that you wanted that robotic cat food dish? 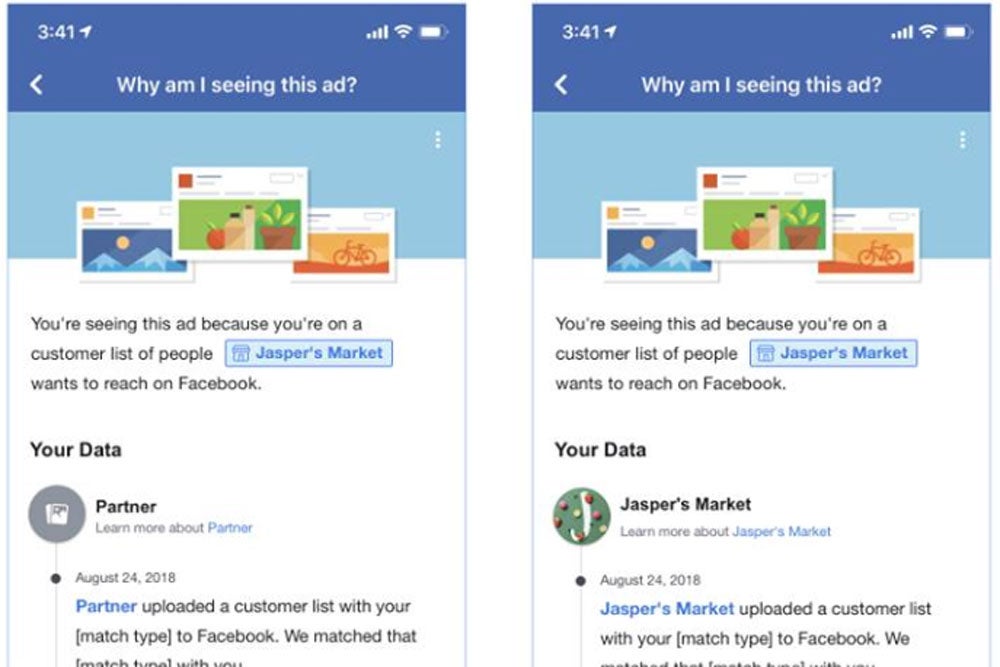 Scroll through your Facebook page, and you’ll eventually run into an ad. Sometimes it’s hawking something that you totally want to buy—that’s how I ended up with an elaborate set of stairs to help my dog get on the couch—but sometimes it’s way off. Starting at the end of February, Facebook will start telling you more information about why you’re seeing an advertisement. More specifically, you’ll know what companies uploaded lists containing your personal information.

Right now, if you click on the three dots above a Facebook ad, you can select “Why am I seeing this ad?” and it will show you some information about how it ended up in your feed. This feature has been around since 2014, but you still have to go looking for it every time you want to figure out how that ad ended up in your view. If you haven’t use this feature, you might find some interesting info already.

Some of the information is pretty straightforward. An airline ad targeted me because I had recently taken a flight, and a toy ad targeted me because of my age and the fact that I’m a parent. But a T-Mobile ad specifically wanted to get in front of my eyeballs because of my perceived political affiliation. I don’t explicitly identify as part of a political party on Facebook, but the service has analyzed my posts and assessed me in that way without directly telling me about it. It’s likely done the same for you, and you can see what political party Facebook thinks you’re a part of by following the directions in this post.

These custom target groups are part of what allows Facebook to say that it doesn’t “sell user data,” which it technically doesn’t. Instead, advertisers often come to the social network with specific segments of users in mind, and Facebook takes it from there. So, if a company wants to target users to buy their running shoes, they can ask for certain age groups or people who already like other shoe brands.

However, there’s a different method for ads to show up in your feed and that involves companies uploading lists of user data that contain your name and personal information according to an announcement Facebook made on its Advertiser Hub page. These lists can come from a variety of sources including apps, websites, or services for which you’ve signed up.

In the scenario that Facebook provided in the announcement of its upcoming change, the example is a supermarket chain. A business like that could get your information when you sign up for their loyalty program—bet you didn’t read the terms of service on that one when you signed up—or from a marketer who has gotten a list from someone else.

The new Facebook feature will more explicitly explain the chain of information that led to your feed. So, it includes the name of the business targeting you, as well as the company from which they got your data.

The newly available information will give users more transparency about who is collecting their data and distributing it. Technically, users could use this data to find out what collections they’re in and try to get more information or modify their online behavior to avoid tracking.

Still, Facebook itself does collect a ton of information about you, even when you’re browsing sites outside of its domain. Tracking pixels, cookies, and Facebook share buttons on various websites can still pick up on what you’re doing unless you’re going out of your way to stop them with browser features or other software.

In the future, Facebook may push this concept of ad transparency even further. Political ads, for instance, now have more upfront explanations of who placed them to make it simpler for viewers to trace them back to the source after the catastrophic 2016 election. For now, though, regular ads will still have their lineage hidden in plain site on your page. But, remember it’s there next time you wonder how an ad for a robotic cat food bowl showed up in your feed.