Dust-repellent solar panels could save billions of gallons of water

Solar farms have a significant clean water footprint. But new technologies could help. 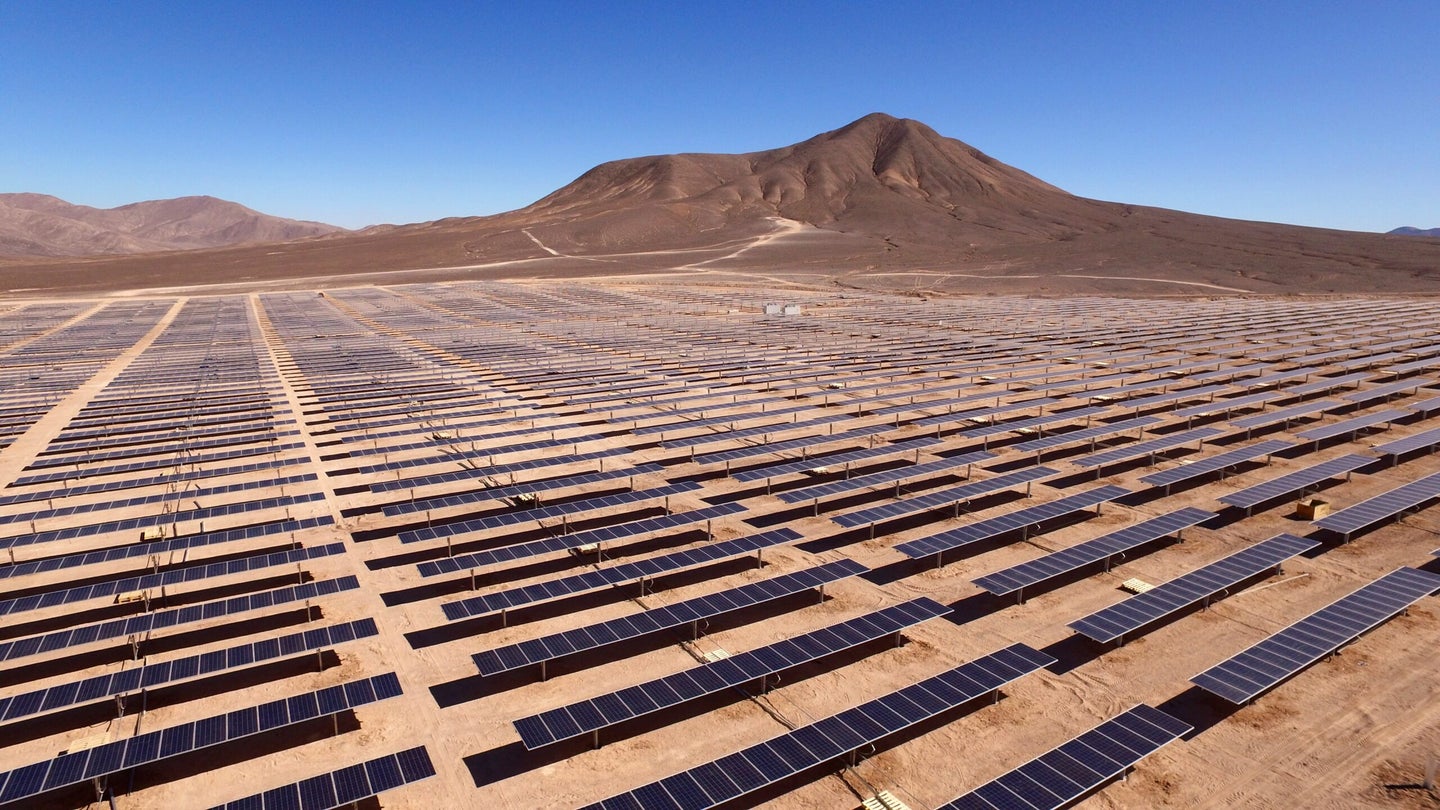 Deserts are perfect for solar farms—minus the dust. Antonio Garcia on Unsplash
SHARE

Most of the large-scale solar parks in the world are located in deserts. These landscapes provide ample vacant land and year-round sunlight for solar power production. Researchers have envisioned transforming the Sahara—the vastest desert region on earth—into a massive solar park that might have the potential of producing four times the world’s present energy demand.

But, there’s a major problem—dust. Gradual dust accumulation on solar panels can reduce their efficiency by almost 30 percent within one month of operation. For some context, solar power losses of only three to four percent on a global scale could mean an economic loss of at least 3.3 to 5.5 billion dollars. As climate change intensifies dust storms, there may be a rapid loss of solar panels’ efficiency unless they are cleaned several times a month.

Pressurized water jets and sprays are the most common method of cleaning solar panels. To avoid the risk of staining and damaging the glass of solar panels, only pure and demineralized water can be used. The need to transport clean water to dry or remote desert regions with scarce water supplies accounts for 10 percent of solar parks’ operations and maintenance costs.

While the global capacity of solar parks is currently above 500 gigawatts, researchers estimate that up to 10 billion gallons of drinking water are used every year just for cleaning solar panels. To put things in perspective, that amount of water can fulfill the annual requirements of approximately 2 million people living in developing countries.

“I was amazed at the sheer amount of pure water that is required for cleaning solar panels,” says Kripa Varanasi, a professor of mechanical engineering at MIT (no relation to the author). “The water footprint of the solar industry is only going to grow in the future. We need to figure out how to make solar farms more sustainable.”

The need for a waterless and contact-free cleaning method

Attempts to get rid of dust accumulation on solar panels by using dry scrubbing methods like brushes and air pressure risk damaging solar panels due to the surface getting scratched over time.

The inefficiency of current cleaning methods motivated Varanasi and his graduate student, Sreedath Panat, to invent a contactless cleaning system that can automatically repel dust from solar panels with zero water usage.

The new system uses electrostatic repulsion to zap dust particles off the surface of solar panels. While dust by itself is not a conductor, they found that applying an electric force or adequate voltage range through an electrode—such as a metal bar—that passes right above the solar panel’s surface charges the dust particles resting on the panel. Next, an opposite charge is applied to a transparent film—similar to the ones used on phones and laptops—which is then installed on the system, allowing the glass surface of the panel to repel pesky dust particles.

[Related: Floating solar panels could be the next big thing in clean energy.]

This system can be used separately along with a solar panel cleaning robot. Alternatively, it is retrofitted along each side of the panel and functions on a small amount of solar energy. Varanasi and Panat wrote about their research in a recent paper published in the journal Science Advances.

In the past, NASA has used electrostatics for removing dust from solar panels on Mars rovers with the help of electrodynamic screens. However, that technology worked only because they were implemented in extremely dry conditions without humidity impossible on Earth. “It also requires expensive interdigitated electrodes that have a weaker force and cannot tolerate moisture,” explains Varanasi.

That made the duo opt for a different method of using electrostatics for Earth-bound solar panel cleaning. They began by conducting experiments with different sizes of dust particles and discovered that the silica in dust particles absorbs moisture from the atmosphere.

“A charge on the dust particles comes from a thin layer of absorbed water that is only a few nanometers thick but still acts as a conductor. That enabled us to estimate the electric force of dust particles and remove dust particles between the sizes of 30 to 40 microns,” says Varanasi.

This promising breakthrough for the researchers arrived after performing their experiments at a wide range of humidity levels from five percent to 95 percent. They then observed that humidity is the driving force behind making the system work.

“As long as the relative humidity is above 30 percent, this system is robust and works very well,” says Varanasi. “We can apply this to most geographical areas and even the driest deserts because of dew formations in the mornings.”

[Related: What you need to know about converting your home to solar.]

The duo has created a lab-scale prototype that consists of a solar panel, a conductive surface, and a moving electrode attached to the top. But, this system still can’t rid a solar panel of particles less than 10 microns in size.

“These tiny dust particles are the ones that create the shadowing effect on solar panels,” he adds. “We are working on some more improvements to overcome that issue.”

As the MIT engineers are preparing to make their new system scalable in the future, other researchers are working towards developing a solar panel coating technology to reduce dust accumulation. Inspired by the lotus leaf’s self-cleaning properties, Germany-based researchers at Ben-Gurion University attempted to develop silicon-based, hydrophobic coating for solar panels. This could prevent dust from accumulating on the surface of solar panels and reduce the amount of water required to clean them.

As of now, a UK-based company, Solar Sharc, has already launched a dust repellent coating for solar panels. They use nanoparticle structures for transparency that are only a few microns thick. According to the company’s website, the coating is self-cleaning and enables the formation of water droplets on the surface that can roll off the panels.

But Varanasi says the problem with a coating of nanostructures is that it could erode over time after withstanding dust storms and windy conditions. “The texture of the anti-soil coating on the solar panels’ surfaces could then get affected and lose its transparency,” he says.

Despite all the convoluted challenges involved in preventing dust accumulation on solar panels, engineers like Varanasi remain optimistic about developing the right technology for making the solar industry more environmentally sustainable.

“Water is a precious resource,” he says. “If the solar industry is proactive and approaches this problem from a holistic view, it will not directly impact communities’ access to clean water.”