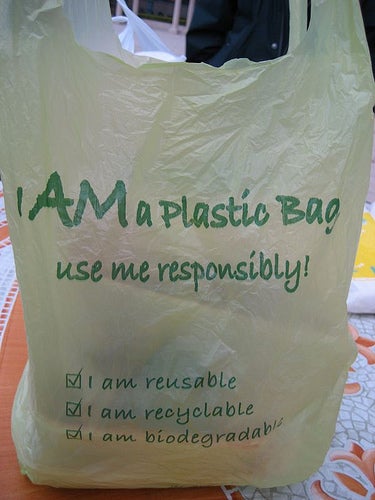 On the heels of our reporting about Canada’s probable move to ban BPA plastics comes a story about researchers working at Missouri University of Science and Technology to develop hybrid plastics that would biodegrade in landfills within four months. As our editor Nicole Dyer pointed out in a comment to the BPA post, the larger and more important issue facing plastics is their propensity to stick around forever. As we pointed out in our article about the waste gyre in the Pacific Ocean, plastics will eventually photodegrade into microscopic bits, but those polymer molecules will forever be inorganic toxins. The Missouri S&T scientists are working to change that by focusing their attention on a biodegradable polyester.

Polylactic acid is a polyester derived from corn starch which decomposes and mineralizes into water and carbon dioxide when composted. It’s already being used in some brands of compostable “plastic” bags. The team is working to blend the acid with other bio- and oil-based polymers to find the right kinds of resins for commercial use. They’re also looking at repurposing waste materials resulting from biodiesel refinement—anything that can be culled from renewable sources. Whether this is a long-term solution remains to be seen.