The superhero's suit of armor is pretty cool, but the toys he uses to build it are even more impressive 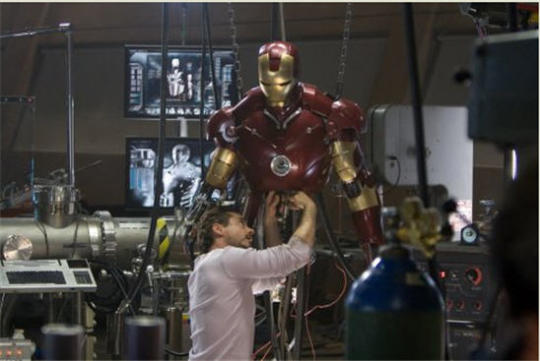 Yes, there are some great robot fight scenes, nefarious villains, a few human interest plotlines, even characters that seem like genuine people, but the new movie Iron Man is really about the lab, and its ridiculously cool toys.

Iron Man, which has grossed more than its reported $140 million budget in less than a week due to worldwide box office success, follows Tony Stark, a brilliant, vain, and wildly wealthy weapons designer who has a serious change of heart—literally and figuratively—after getting kidnapped by a band of terrorists. He goes on to build an exoskeleton that allows him to fly at supersonic speeds, catch SUVs, fire all sorts of missiles, and generally fight evil with tech. We previewed the flick in our May issue, while also comparing it with the real-world Raytheon Sarcos XOS exoskeleton. And although a few conversations with the filmmakers did indicate that the movie would be a tech fan’s dream, it, um, blasted through even our heightened expectations.

The suit itself is impressive—and we’ll get to that in a minute—but it’s the lab that really stands out. When Stark gets back home, he sets to work in his basement office. Designing and building a wearable robot might seem like an impossible task for one man, but he has quite a bit of help. Three or four AI-enabled robotic assistants work with him, and while he does talk to and even scold them, they’re not cheesy, hard-to-believe humanoids that talk back. Instead they look industrial, built for specific functions, and slightly more plausible as a result. His computer-based design tools are even more eye-popping. A waist-high table projects 3D holographic images that allow him to test and tweak virtual mock-ups. At one point there’s a projection of a gauntlet hovering above the table, and Stark slips his hand inside the image to see how it fits.

Realistic? Maybe not. But it’s effective. All the design tools and robot assistants make you think it might be possible for a sufficiently brilliant and industrious inventor to do the work of ten or twenty engineers.

Building something with the capabilities of the film’s suit, though, would require a bit more than a sweet lab. Unlike other superhero flicks, Iron Man pretty much skips the techno-babble and pseudo-scientific banter. Which is great, because there’s no point trying to explain how Iron Man could fire powerful beams from his hands and chest without moving himself. That old action/reaction rule? The comic version of Iron Man dispenses with it by saying that Stark invented one-way force projection technology. But the movie chooses to skip the details, and keeps you focused on the flashy (albeit equally far-fetched) design and build process, and all the toys involved therein, rather than the laws of physics.

The key piece of technology in the suit is a hamburger-sized device called an arc reactor that spits out as much electricity as several large-scale power plants. There’s no use pointing out the fact that no such device is close to possible based on what we know today. But the cool point here is that the filmmakers clearly thought about the kind of power you’d need to make a suit like this work. They realized it would be a major, major issue—and it’s exactly the hurdle that real-world exoskeleton designers are facing today. They can build amazing machines that endow people with superhuman strength, but they’re still trying to figure out how to power those wearable robots for more than short stints.

Stark’s arc reactor would do the trick. It would also solve the world’s energy problems, but if he had chosen that route to save the planet, the resulting film wouldn’t be so much fun. And, more importantly, there wouldn’t be any robot fights.