Science Of Theft: Freeze A Bike Lock With Canned Air, Then Smash It With A Hammer

The fatal flaw of bike locks: Freezing one makes it easy to bust open. Check out video of some DIY bike theft inside. 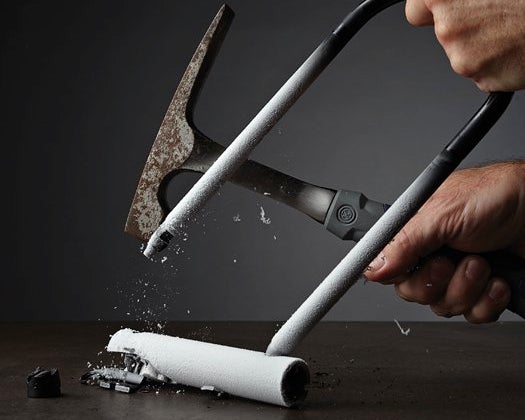 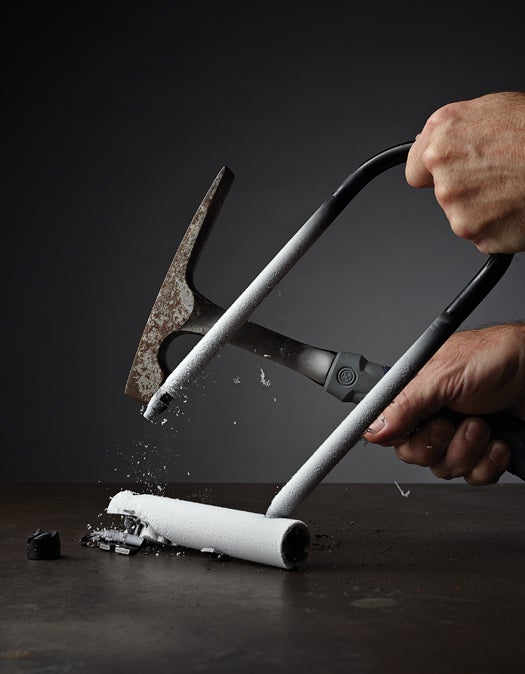 This U-lock was specially treated to make it harder to break. But after cooling it with canned air, it cracked with just a few blows.

Strong, hard, tough. These sound like different ways of saying the same thing, perhaps describing a really good suitcase. But when applied to the physical properties of materials, each of these words has a very specific technical meaning that distinguishes it from the others. And those definitions explain why it’s so difficult to make a bicycle lock that can foil thieves.

Imagine a chain made of diamond. It would be impossible to cut with any hacksaw, but it could easily be defeated with a brick. Diamond is hard, but also brittle, much like glass. What diamond lacks is toughness: the ability to absorb energy without failing. A chain made of rubber would be far tougher in the technical sense. You could pound it for hours with a brick without breaking it. But it would not be hard enough to resist cutting.

At room temperature, a rubber ball is soft but tough and resists hammer blows. At –321°F it’s rock hard and cracks easily.

It’s actually not possible to make the hardest material also very tough. Harder materials can’t yield to absorb energy and then spring back the way softer ones can. Their hardness means it requires less energy to break them. Take steel, for example. Bike-lock cables are made of very tough steel. You can’t easily break a cable by hammering it. But compared with the high-carbon steel used to make tools, it’s very soft, so it can be cut with a hacksaw.

Good locks are case-hardened, which means they have a hard but brittle outer layer protecting a tougher, softer inner core. But savvy thieves know that even good locks have a fatal flaw: Nearly any material, including steel, becomes less flexible when it’s very cold. Although it doesn’t lose any tensile strength—defined as how much force is needed to break it—the loss of flexibility makes it less tough.

When cooled to –13°F with canned air spray (actually the compressed chemical difluoroethane), even very tough locks become brittle enough to smash open with a hammer. So there isn’t much that lock manufacturers can do to finally put an end to their long war with bike thieves. In the meantime, you might consider just taking your bike inside with you.