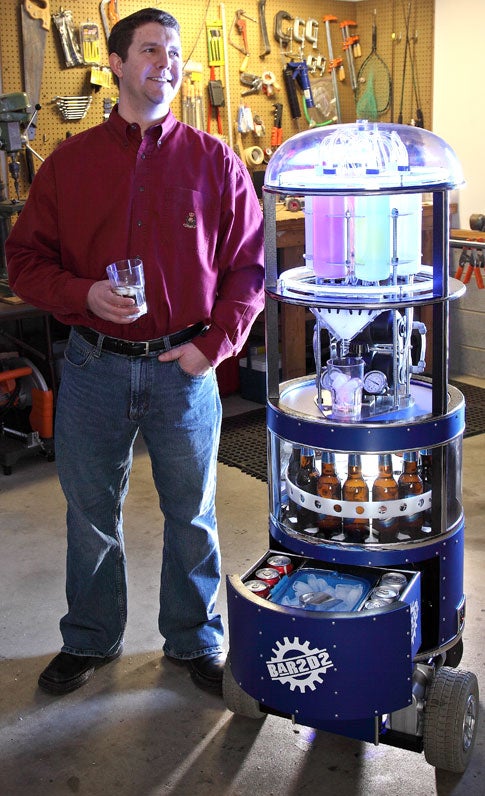 A veteran of the TV show Battlebots, Jamie Price has built plenty of destructive machines. But late last year, he designed a robot with a more mellow calling: offering cold beer and cocktails. The result — a masterpiece of plywood, plastic, aluminum and electric motors called Bar2D2 — serves up everything but the sage advice.

The 35-year-old salesman from Nashville modeled his machine on the iconic Star Wars droid R2D2. He took a plastic dome from a bird feeder to use as a head and built the robot’s plywood skeleton to match. To make Bar2D2 mobile, Price stripped out the seat, the control system and a pair of wheels from a used electric wheelchair, added a new 12-volt battery, and wired a receiver to the motor so he could control it using an R/C helicopter-type remote. He also created a system that lets him send drink orders wirelessly from his computer to the robot, which then mixes the spirits to make perfect cocktails.

Bar2D2 proved to be a hit when Price took it to a convention recently, but he isn’t finished yet. Next he’s adding a breathalyzer and LED-backed projector that displays blood-alcohol content. Give me your keys, Obi-Wan.

Read on for how Bar2D2 works. 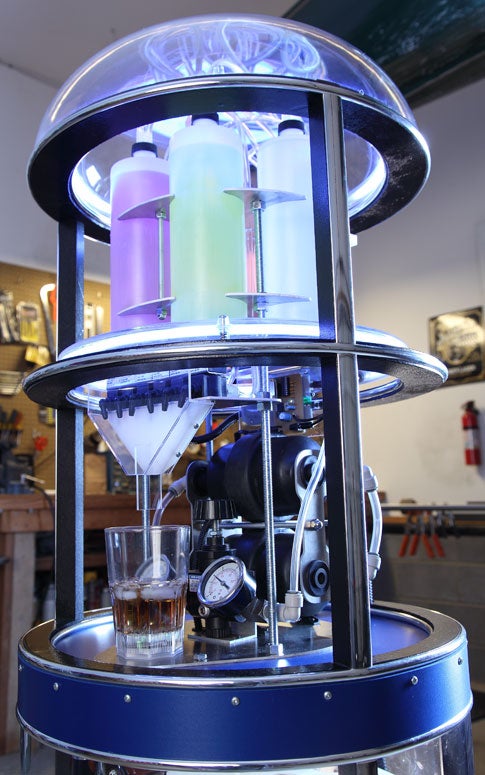 The cocktail maker can create a variety of drinks on demand 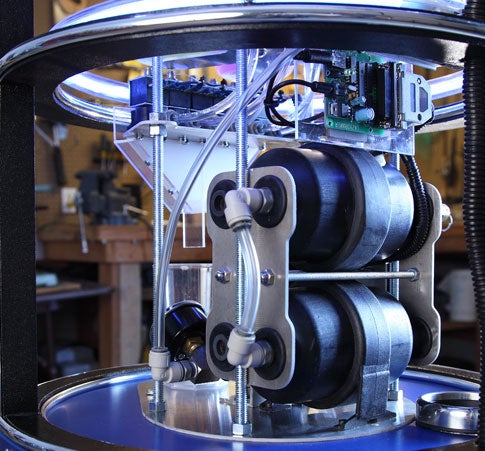 Pressurized air forces booze and mixers through a series of hoses

Wireless Mixology
The robot has a fully automated booze-dispensing system. Price fills each of the robot’s six bottles with either liquor or a mixer (soda, juice, etc.) and then plugs these ingredients into a software program on his laptop. The program computes a list of possible drinks given those ingredients, Price picks one, and the software sends the pouring instructions to the robot via Bluetooth. A custom circuit board receives the signals and moves actuators that open specific valves just long enough for the robot’s air-pressure system to force the right amount of each liquid into a waiting glass. 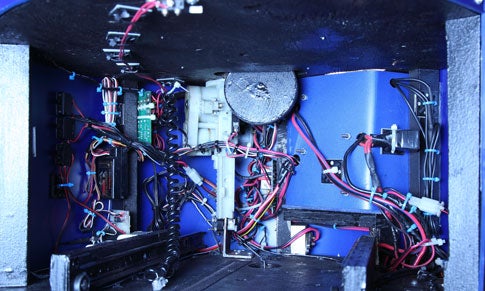 Motors for the drawer, elevator and turntable are wired to one battery

Elevating Beers
One of the major difficulties of the project was finding a way to move bottles up from the enclosed beer rack on the robot’s second level to the section above, which has an open panel that allows Bar2’s patrons to grab their drink. The solution: a motorized caulk gun. When Price hits a button on his remote, the gun’s rod extends and pushes the beer up from the lower level. He calls it his beer elevator.

Funk Factor
To increase Bar2D2’s party appeal, Price equipped it with an off-the-shelf, sound-activated neon lighting display so the robot can flash in rhythm with music. He wanted to add a speaker system but decided that would make it too tall and potentially unstable.

Behind the Wheel
Everything — the motorized ice tray, the beer elevator and turntable, the robot’s wheels — is controlled by a remote normally used for R/C airplanes and helicopters. Price had it left over from one of his Battlebots machines called The Little Engine That Killed. “I took it from the fighting robot and used it for the loving robot,” he jokes.