Could a million monkeys with a million typewriters really replicate Shakespeare?

All the ways you can guess your way to success. 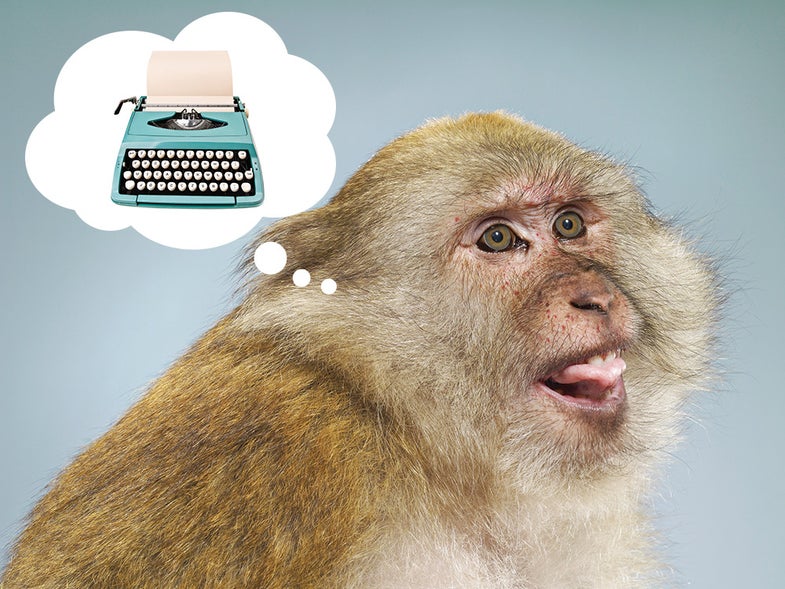 You’ve probably heard that if you were to unleash an infinite number of monkeys on an equal abundance of keyboards, they would eventually reproduce the entire works of ­Shakespeare. This famous thought ­experiment doesn’t mean to suggest the Bard was no better than a busy baboon; it’s designed to show a mathematical truism about the concept of infinity (and how it’s, like, literally infinite). Once we stopped ­trying to wrap our heads around an ever-­expanding universe crammed with endlessly replicating macaques and gibbons, we decided to crunch the numbers. What are the odds of mimicking acts of genius by totally random chance?

The odds of randomly typing “To be or not to be.” A 2003 experiment aimed at testing the theory suggests it might help to start by teaching the monkeys not to pee on their keyboards.

“To be” is a lot easier. Randomly writing Shakespeare takes time, OK? Programmers once mirrored his works in mere months using millions of bots, but they saved each little fragment as it appeared—in no particular order—which is definitely cheating.

The New York Times’ mini crossword puzzle has about 21 squares. Since each puzzle is available online for only 24 hours, you’d have to try 21 octillion letters per hour in each spot to crack it.

Skipped out on studying? You have an infinitesimal chance (1-in-521 x 1090) of correctly guessing all 154 multiple choice questions on the SAT. Maybe you’ll score bonus points for using “novemvigintillion” in the essay.

Nothing more random than a coin flip, right? One study found that a toss is actually slightly biased in favor of whichever side you start out on.

The SAT makes randomly filling out a perfect bracket for March Madness, the 63-game basketball championship, look easy. But it couldn’t hurt to up your odds by following the sport.

Want to win the Powerball? You’re 270 times as likely to get hit by lightning. This year.